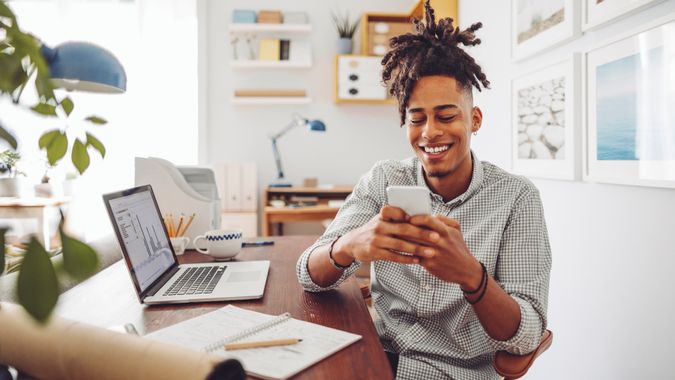 Banking is a critical part of building wealth for millions of Americans. Banks not only allow us to store our cash; they also provide financing for our major purchases, such as cars and new homes. Unfortunately, this cornerstone of the American dream is not available to everyone. “Racial discrimination in the banking industry and financial system persist today,” said Jazzy, founder of First Hustle Then Brunch. “Black people face challenges accessing financing, as well as financial education. Many people are drawn to the fact that Black-owned banks reinvest in the communities in which they serve.”

Find Out: Are You Missing Out on Free Money? 80% of Americans Aren’t Taking Advantage of COVID Relief

Learn More: Your Third Stimulus Check Could Be Eligible for a Bonus Payment

Greenwood has joined the growing ranks of modern, online-only banks. But unlike many digital banks, Greenwood Bank is Black-owned. It has a mission of keeping wealth in Black and Latinx communities. In addition, every new account opened helps feed five meals to a family in need.

Mechanics & Farmers Bank is based in Durham, North Carolina. It is the second-oldest minority-owned bank in the United States, having opened in 1907. According to the bank’s website, it has maintained an “Outstanding” Community Reinvestment Act (CRA) rating for 25 years. Mechanics & Farmers is owned by M&F Bancorp Inc.

Goalsetter is a saving, smart spending and financial literacy platform created especially for kids and families. “Never before in the history of our country has a kids’ banking app offered fun, game-based financial education created by a former Nickelodeon executive,” says Tanya Van Court, creator of Goalsetter. “We are excited to provide kids with a platform that doesn’t just teach them how to spend, but teaches them the core components of building wealth…powered by the memes, gifs and pop culture that they already love.”

OPTUS Bank was founded in 1921 and is based in Columbia, South Carolina. It is the only Black-owned bank currently in operation in South Carolina. It recently received $3 million in funding from Wells Fargo to better service minority communities. OPTUS Bank was formed when a group of African American leaders founded Victory Savings Bank, “on the principle that all people should have access to the American Dream, not just those born into the ‘right’ circumstances.”

Russell and Company is an investment and financial planning company located in Columbus, Ohio. Its mission is to provide quality investment advice and to build lasting relationships. “Our model is we’re a small company with big ideas,” said Walter Russell, CEO of Russell and Company. “What I believe in is planning for retirement and building a legacy not only for myself and my children but also for each of my clients, because that’s how you win in this financial space.”

Formerly Broadway Federal Bank, this financial institution was founded in 1946 and is based in Los Angeles. This bank invests an impressive 76% of money deposited back into its local communities. The majority of that money goes toward affordable housing projects. Like many Black-owned financial institutions, this bank was founded because minority consumers were not gaining access to the funding they needed. In April of 2021, Broadway Federal Bank merged with City First Bank of DC. This move has positioned City First as “the largest Black-led Minority Depository Institution (MDI) in the nation,” according to the bank’s website.

Tri-State Bank of Memphis was founded in 1946 and is based in Memphis, Tennessee. This bank invests heavily in small businesses, which receive $21 out of every $100 deposited. Tri-State Bank was founded by Dr. J.E. Walker and his son, A. Maceo Walker, who wanted to effect positive financial change in their community. In June, Tri-State Bank of Memphis announced that it would be seeking to merge with Liberty Bank and Trust Co., the third-largest Black-owned bank. The merger will cement the institution as the nation’s largest Black-owned bank, according to a report in USA Today.