Most Americans have bank accounts. But whether they have a good understanding of those accounts is up for debate, as findings from a new GOBankingRates survey suggest.

GOBankingRates surveyed more than 1,000 Americans to learn about their banking habits, preferences, fears and knowledge. Overall, the survey found that many Americans don’t understand certain basic banking concepts, such as interest rates. And there are several misconceptions about online banking that might be preventing many Americans from taking advantage of the benefits online banks have to offer.

Click to See: 69% of Americans Aren’t Using This Easy Trick to Grow Their Savings

Here’s what GOBankingRates found out about Americans’ banking preferences and knowledge of banking basics.

Young adults ages 18 to 24 years old had the highest percentage of respondents who said they didn’t know what type of account usually has the highest savings rates at 43 percent. However, baby boomers ages 55 to 64 had the second-highest percentage of respondents at 36 percent. And women were less likely than men to know which accounts have the best rates — 39 percent versus 26 percent.

“According to the FDIC, the average interest rate on savings accounts is 0.09 percent, with many of the largest financial institutions paying as little as 0.01 percent,” said Diane Morais, president of consumer and commercial banking products at Ally Bank, which was named by GOBankingRates as the best online bank of 2019. “Conversely, the average interest rate among the top online banks is 20 times higher than the national average of all banks.”

Although the survey found that more than a quarter of Americans think checking accounts usually offer the best rates, many checking accounts don’t even pay interest. Among those that do, the average rate paid is just 0.06 percent, according to the Federal Deposit Insurance Corp. 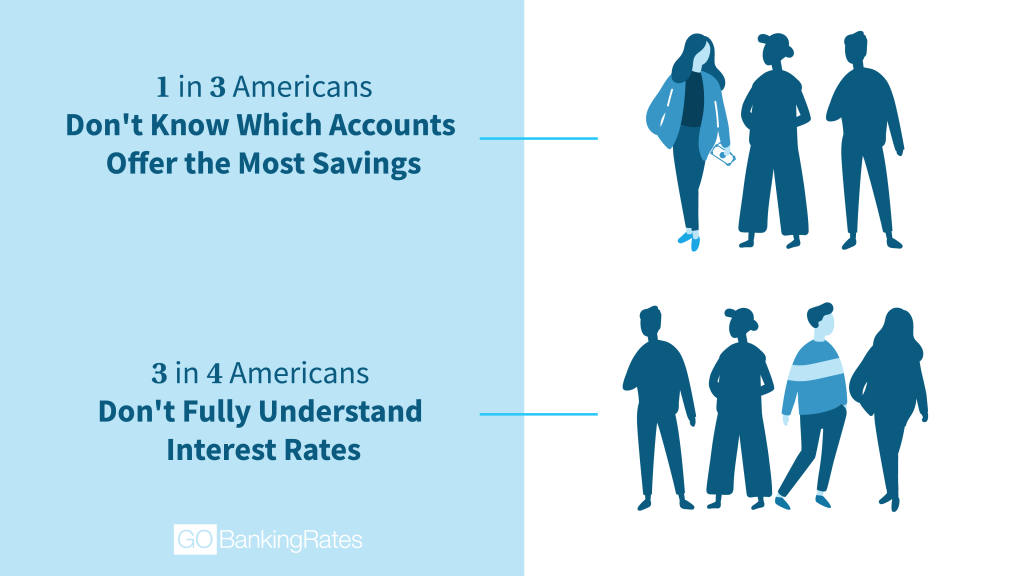 Americans might not know what type of account tends to offer the best rate because the survey found that there is confusion about how rates work. When asked what option they would choose if they were to open a checking or savings account, 36 percent of respondents opted for an account with a 1.25 percent APR, while about a quarter said they would choose an account with a 1.25 percent APY. Although the percentages are the same — and were the highest percentages respondents could choose — there is a difference between the two.

“When you shop for a savings account, it’s important to compare APY,” Morais said. It’s also important to pay attention to how frequently interest compounds on an account. Your money will grow faster in an account that compounds daily. 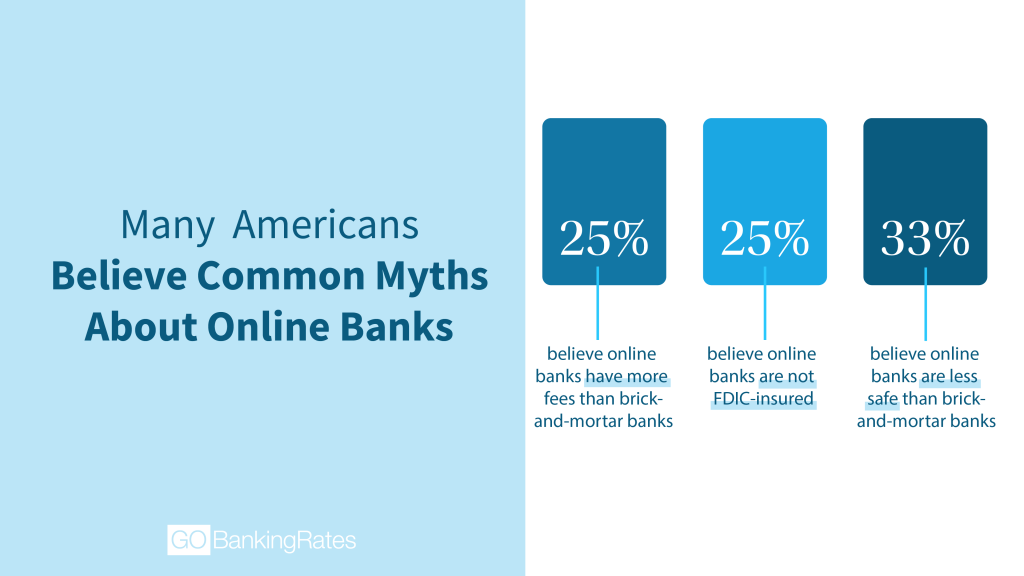 Many online banks are among the finalists in GOBankingRates’ annual ranking of best banks because they have no monthly service fees and offer high savings rates. As for safety, online banks that are FDIC-insured are as secure as brick-and-mortar banks. FDIC deposit insurance will protect you if an FDIC-insured bank fails and will cover up to $250,000 in deposits per depositor.

Plus, you can access any money you deposit into an online bank just like you can at a brick-and-mortar bank. Online banks partner with ATM networks, which typically allow customers to access their money without fees. And online banks often reimburse customers for fees charged by out-of-network ATMs, up to a certain amount.

Biggest Fears Consumers Have When Banking: Data Breaches and Fraud

Americans’ fears about banking security are warranted because 36 percent of financial services enterprises experienced data breaches in the past year, according to the 2018 Thales Data Threat Report. However, the report found that 84 percent of U.S. financial services enterprises are increasing security spending to combat data breaches. So banks are taking more steps — in addition to the ones they have in place — to protect customers’ personal information.

“As security concerns intensify, it’s paramount that we invest in infrastructure and technology that will protect consumer data,” said Jason Thacker, head of U.S. consumer deposits and payments at TD Bank, which was named the best national bank of 2019 by GOBankingRates.

Bank customers can take simple steps to protect their account information. For example, customers should use different usernames and passwords for each financial account. Passwords should also be a combination of uppercase and lowercase letters, numbers and symbols. If your bank offers a two-step verification process when logging into your account, use it for an extra layer of protection. Also, avoid accessing your financial accounts through public WiFi sources.

Americans Fear Theft Over Never Being Able to Retire, Have a Family and More

The survey found that more than 40 percent of Americans are even more afraid of someone stealing their bank account information or money than not having a job, never being able to retire and incurring excessive bank fees.

Despite fears about banking, the survey found that an overwhelming majority of Americans — 88 percent — have checking accounts. And most Americans seem to be happy with their current bank.

If Americans were to open a new account, though, the most popular feature that would entice them is good rates. The second-most popular feature that respondents said would entice them to open a new account is low fees. Younger adults were more likely than older adults to find these two features enticing. Older adults ages 55 and up, on the other hand, were more likely than younger generations to say that they wouldn’t open a new bank account.

Americans who want to save more for emergencies or other short-term goals should look for a high-yield savings account such as the ones offered by the banks with the top 10 best savings accounts of 2019. For retirement savings, Americans should take advantage of workplace retirement plans such as 401ks, if their employer offers this benefit. Otherwise, they should save in an IRA or Roth IRA — or a solo 401k or SEP-IRA if they are self-employed.

Most Americans Plan to Stick With Their Bank in 2019

The survey found that the most common reason Americans chose their current bank is convenience. Customer service was the second-most common reason. Interestingly, Americans were less likely to say that they chose their bank because it offered good rates on deposit accounts and low fees, despite the fact that these two features were found to be the most likely to entice Americans to open a new account.

However, it might not be loyalty or satisfaction with the service that’s keeping Americans at their current bank. The survey found that 22 percent of respondents don’t want to deal with the hassle of switching banks. Considering that the survey found that respondents are paying an average of $7 in bank fees per month, many Americans could be losing money by staying at their current bank. With the availability of free checking accounts, some could be better off switching banks to avoid fees.

“While most Americans embrace mobile banking technology, and some prefer to do their banking via digital channels, consumers still enjoy the in-person experience of walking into a branch,” Thacker said.

Although traditional banks tend to have an online presence, their brick-and-mortar locations are still a draw for customers.

“Our branches continue to be a place where customers can sit down with a banker and have a meaningful conversation about their finances to help them reach their goals, and a place where customers can find a friendly, helpful team member ready to assist in their time of need or answer questions they may have,” said Erin Constantine, head of consumer deposit products at Wells Fargo. Often, though, customers come to branches to get help with using the bank’s self-service digital tools such as online banking and mobile apps, she said.

In fact, the GOBankingRates survey found that 76 percent of respondents said they wouldn’t consider opening an account with a bank that doesn’t have a mobile app. Surprisingly, older adults are slightly more likely to shy away from banks that don’t have mobile apps. The survey found that 80 percent of adults 65 and older and 81 percent of adults ages 45 to 54 said they wouldn’t open an account with a bank that didn’t offer a mobile app.

“It makes sense that today’s on-the-go consumers expect a mobile app, and at the same time, continue to seek other channels for their banking needs,” Constantine said. “Our long-term trends indicate that our customers are increasingly seeking mobile banking and that they are becoming more and more comfortable with using it as a daily touch point for their finances.”

In general, banks — even traditional brick-and-mortar banks — have been adapting to meet customers’ preferences. “We’re constantly evolving our strategy to deliver services based on unique market demands — and away from a one-size-fits-all model,” Thacker said. “We recognize the importance of allowing customers to bank when, where and how they want.”

How to Find the Best Bank for Your Needs

Although the survey found that most Americans don’t plan on switching banks this year, they might be missing out on better rates and paying unnecessary fees by sticking with their current financial institution. Online banks tend to offer better savings rates and lower fees because they don’t have the high overhead costs that brick-and-mortar banks do. Credit unions also tend to offer better interest rates and lower fees because they are nonprofit organizations that exist to serve their members.

That’s not to say that you can’t find traditional banks with low fees and competitive rates. If you value in-person banking, a brick-and-mortar bank might be the best option for you. However, if your current bank charges high fees, doesn’t offer competitive savings rates and doesn’t provide features that make banking easier, such as a mobile app, consider shopping around for a new bank.

Click through to discover why 69 percent of Americans have less than $1,000 in savings.

All information in this article is accurate at the time the study was conducted in January 2019. 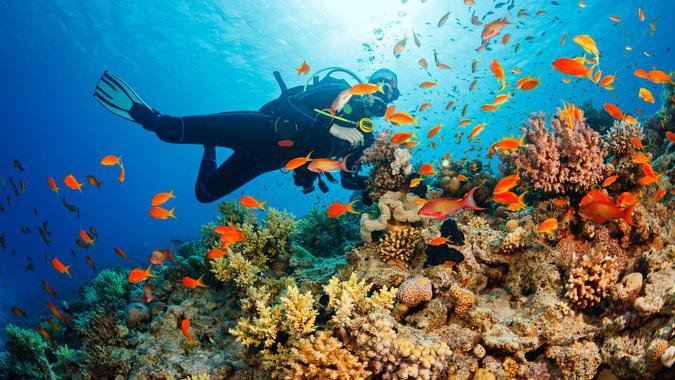