Charge cards, those seemingly quaint predecessors to the modern credit card, are actually still in business. They’re just vastly overshadowed by the ubiquity of credit cards. They still make a lot of sense, however, and for some people they might be the answer to alleviate from debt. How to know whether a charge card is right for you is a matter of your spending and payment habits.

Charges cards were introduced to the public back in the mid-1950s. Their premise is simple: with a charge card you can walk into a store where they’re accepted and charge whatever you need. Then at the end of the month you pay off the entire balance. Because you pay off the balance no interest is charged and you’ve got a clean slate of credit every month.

For some people, having no interest rate will be very appealing. Sometimes the high interest rates charged by the credit card companies can leave people tied to their credit card balance for years, and some may not ever be able to get out from under because it just keeps on growing from the compounded interest. This won’t be the case with a charge card because there’s no interest charged. Also having a charge card helps people to set their spending limits, because they know they have to pay the full amount at the end of every month; which helps in building a good credit history.

A downside to charge cards is the fact that you have to pay off the full balance every month. If you’ve racked up $3,000 in charges and the bill comes due, and you can’t pay it, you’re going to be hit with serious penalties and fees. And if you’re the type that does not have self control – having a charge card could become a problem and can cause your credit to go down. 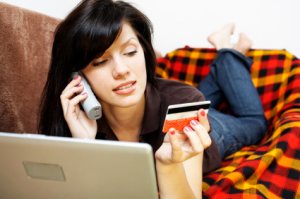 Asking Credit Card Companies for a Lower Rate Could Hurt You