New Credit Card Technology That Will Change How You Pay 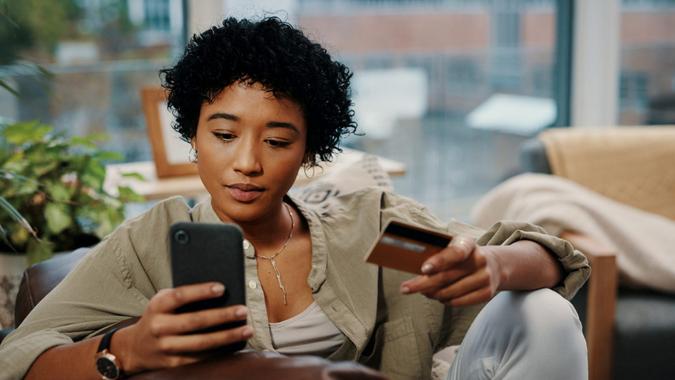 Cash may be king for now, but credit cards are poised to overthrow the throne. Based on information from the most recent U.S. Census Bureau, close to 200 million American adults have a credit card, a charge card or some combination of the two.

See: Why It’s Still Better To Use Your Credit Card Over Your Debit Card
Learn: The Top Purchases You Should Always Make With a Credit Card

But credit cards have their shortcomings, namely around security. Credit card fraud is the No. 1 type of identity theft, with millions of Americans being scammed yearly. To address the issue, credit card companies are churning out new technologies to keep consumers safe — and of course, enable them to more easily spend.

To learn of the latest emerging trends in the credit card space, GOBankingRates consulted experts in the field. Here’s a look at new innovations in the world of credit cards.

Read: The Top Things To Consider Before Applying For a New Credit Card

Credit cards that enable contactless payment date back well over a decade in the U.S, but they took a while to catch on. The pandemic helped accelerate consumer adoption of this technology, with total usage of contactless payments rising 150% in the U.S alone between March 2019 and June 2020.

We can expect this trend to evolve and become even more popular.

“According to a survey by Raydiant, over 50% of American shoppers now use contactless payments, and this number is expected to considerably rise in the near future,” said John Marsano, CEO and president at Inheritance Advanced. “People prefer contactless payments due to the convenience of the process.”

Important: How Many Credit Cards Should You Have? And More Credit Card Questions Answered
Tips: I Use These 3 Foolproof Strategies To Avoid Credit Card Debt

“Mag stripes, banking systems, and chip systems are all open to abuse by hackers,” said Swati Chalumuri, founder of HearMeFolks.”This has seen the rise of more tamper-proof systems such as RFID but the battle is not over yet. To keep up with the crooks, credit card issuers are set to increase the number of multi-factor identification for different transactions. This could mean spending an extra second on the ATM or POS. Eventually, though, cases of losing money electronically should reduce in the last quarter of 2021.”

Find Out: 10 Signs That It’s Time To Ditch Your Credit Card

“With more and more shoppers using contactless methods, as well as an increase in online shopping, we can probably expect to see this technology expanding, with greater acceptance in the near future,” said Nathan Grant, senior credit industry analyst at Credit Card Insider. “The next evolution of this level of personal security could be biometric cards that read your fingerprints, but that remains to be seen.

“Currently, many smart phones give you the option to require biometric fingerprint identification to unlock the devices when using mobile payment apps,” Grant continued. “So we can already see this idea coming into fruition.”

“Products such as Arculus are integrating self-custody cryptocurrency wallets where users are able to safely store the private keys for their cryptocurrency,” said John Small, CFO at Roman DBDR. “Self-custody wallets provide significant advantages to cryptocurrency holders. Possession of your own keys means that users are not susceptible to centralized exchange hacks or accounts being compromised. Additionally, possession of their own keys allows users to participate in the decentralized finance (DeFi) community where they can utilize their crypto for digital services and experiences across the globe.”

Helpful: How To Pick the Right Credit Card for Your Spending Habits

“FIDO works by creating a unique key set that identifies a user,” Small said. “By securely storing this key on a credit card, users can digitally unlock and sign every event the card interacts with.”

Opportunities for the Under Banked

“The digitization of credit cards and credit in general means we will start to see newer solutions for the underbanked or those with terrible/no credit history,” said Bruce Garner, co-founder at Card Curator. “All we have to do is watch the revolution in mobile banking that has already taken place all over Africa with companies like Jumo or here in the US with firms like Brigit.”

“As new entrants and competition increases in the credit card space, I expect to see newer rewards and incentives associated with both existing credit cards but more importantly new cards such as Bilt,” Garner said. “It is the first card to give rewards when you pay for your rent with a credit card.”

The smartwatch got us comfortable paying with wearable tech, and soon we’ll likely be paying with more of our apparel and accessories.

“Companies are integrating contactless payment capabilities into almost everything we wear, including shirts, bracelets, watches, and rings,” said David Shipper, senior research analyst at Aite Group. “Wearable payment devices are nice because they can be always available when it’s time to make a payment. For example, an engagement ring that doubles as a payment device may be the deciding factor for someone to say ‘yes’…especially if it’s preloaded with a little spending money.”

Cards With a Dynamic CVV

“The three digit number on the back of your card is a security feature, but it could be stolen when you key it into a website,” Shipper said. “Cards with a dynamic CVV code change periodically so that the number will not work after a certain period of time. This can greatly reduce card fraud.”

“Payments are being integrated into more and more in-car systems,” Shipper said. “In time, these systems will automatically pay for things like tolls, parking, gas, and more. And theoretically, a self-driving car could have its own bank account, which could be used when it drives itself to the dealership for maintenance, or to accept payments as an unmanned taxi.”

Read: 13 Credit Cards That Every 30-Something Should Consider
Good Options: Surprising Uses for Your Credit Card Rewards

One possible feature in the future that sounds like something out of a sci-fi novel is the ability to pay by thought  — or brainwaves.

“This is still not available, but it could be possible with something like a pair of smart glasses that can sense brainwave activity,” Shipper said. ” If you think that waving your phone is an easy way to pay, imagine simply thinking “yes”, and the payment is complete.”

Another innovation that sounds like it was inspired by a Philip K. Dick storyline: payment implants.

“It is possible to convert your contactless card into an implant that you can insert under your skin to make contactless payments,” Shipper said. “While it may be strange and seem scary to some, we conducted a study and found that approximately 41% of consumers in the U.S. are somewhat, very, or extremely interested in an implanted payment device.”