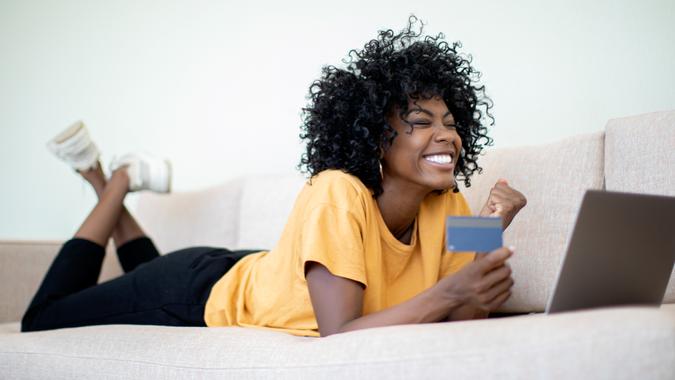 The credit card industry is strongly rebounding from the early impacts of the COVID-19 pandemic, and Gen Z Americans are leading the way in terms of both originations and bank card balance growth, according to a new report.

The TransUnion Q3 2021 Quarterly Credit Industry Insights Report also found that this youngest generation of consumers is performing well on these credit products.

Indeed, the return in consumer demand was most pronounced for Gen Z, as the share of originations increased to 14.2%, a jump from 13.3% last year and 9.5% just two years prior, the report noted.

See: What Happens When You Get Denied for a Credit Card — And What to Do Next
Find: Why Investing Is the Wave of the Future for Gen Z

Matt Komos, vice president of research and consulting at TransUnion, told GOBankingRates that the growth in consumer demand could be attributed to the fact that as the economy recovered and consumers got back to spending, many of these coming-of-age consumers were willing to participate again.

Gen Z in particular is leading the way. As many of these consumers come of age, they are finding they have a need for products such as credit cards, Komos said.

In the third quarter of 2021, Gen Z’s average balance per consumer increased 13.9% year over year — the only generation with two consecutive quarters of growth. Millennials also showed average balance growth per consumer, with a 1.8% year-over-year increase, the report found.

See: The Quickest Ways to Pay Off Your Credit Card Debt
Find: These Are the 15 Best Cities for Gen Z to Live Well on a Budget

“Some of this growth is natural aging of the generation as more consumers enter it, but also, too many of these consumers are engaging back in the economy and using credit products to do so,” he added.

For most consumers, the first credit product of choice tends to be a credit card, and as the country is entering a new phase of the pandemic, “where accommodation programs are not as prevalent and liquidity sources such as stimulus funds are drying up,” it is a natural next step for consumers to reassess their current credit obligations and apply for new forms of credit — especially if access to credit was minimal in the first place,” the report noted.

“What we mean by this is that as the economy recovers and both lenders and consumers get back to the credit ecosystem, and given the current low-interest-rate environment, it is natural for consumers to evaluate their wallet and determine if their credit needs are being sufficiently met,” Komos said. “For the youngest generation of consumers, since they are naturally on the earlier end of building out their credit wallet, they were on the more ‘minimal’ side to begin with.”

See: The Top Things to Consider Before Applying for a New Credit Card
Find: Money Advice You Shouldn’t Pass on to Your Gen Z Kids

The report also showed that as the economy continues to show signs of recovery, card issuers are ramping up for growth and bringing younger consumers into the fold. According to Komos, card issuers across the spectrum do several things from an acquisition standpoint.

“We have heard anecdotally from our customers that they have a focus on these younger generations. We also know that the digital transformation of lending and attracting consumers, accelerated by the pandemic, is a sure way for lenders to meet consumers where they want to be met, and we think this is only going to grow,” he said.

See: 5 Brands That Are Getting It Right With Gen Z
Find: Which Is Smarter — ‘Buy Now, Pay Later’ or Credit Cards?

Interestingly, the report also noted that these younger generations have shown interest in growing their credit obligations not only through traditional products such as credit cards, but also through forms of credit such as “buy now, pay later.”

Komos said that while TransUnion doesn’t have “direct visibility to this data at this time through consumer surveys, we have identified that many consumers find this form of credit to be convenient to use, easy to apply and manage, have product features such as term and APR they like, and are generally a useful form of credit for these consumers.”

Finally, the report also found that in addition to recent credit card growth, the auto, mortgage and personal loan industries have demonstrated renewed signs of strength since the height of the COVID-19 pandemic.