Most of us at one time or another have had to take out a loan to buy a new car or a home. During the process, the lender will pull your credit report and score to find out if you’re worthy of receiving a line of credit. They want to know whether you can repay the money that you’ve borrowed on time, or have a history of being late with your payments. The rates or fees you have to pay on your loan may be based on how well you’ve handled credit over the years.

We’ve all come to accept the fact that we’ll have our credit checked these days when trying to get a loan, but where did the process originate and when did the the three major credit bureaus rise to power?

History of the Credit Bureau

So when did the idea of the credit bureau get it’s start? As far as back as the 1860s we can find traces of the ideas behind credit bureaus. Local merchants would share and maintain lists of individuals who were high credit risks. That allowed them to offer more credit to people who weren’t on the lists, whereas previously, most merchants only extended credit to people they knew personally.

Later on as populations became more mobile and a wider group of merchants across the country needed information to help determine the creditworthiness of individuals, credit bureaus as we know them today began cropping up.

What Are the Three Credit Bureaus?

Over the years, as the number of people seeking credit grew, the ability to find consolidated credit reporting information took on added importance. Today, some 2 billion data points are entered every month into credit records in the U.S, and approximately 1 billion credit cards are actively being used in the U.S. That’s a lot of data to process!

A variety of big and small credit bureaus have been on the scene to help track credit, but a majority of lenders and financial institutions now use one of the “Big Three” credit bureaus in order to assess whether someone is worthy of receiving a loan. The 3 agencies include Equifax, TransUnion and Experian. Let’s take a brief look at their history.

Equifax was founded way back in 1899 as the Retail Credit Company. They grew at a furious pace and had offices throughout North America by the 1920s. By the time the 1960s rolled around, they had credit information for millions of Americans on file, and weren’t afraid to share it with just about anyone.

The passage of the Fair Credit Reporting Act of 1970 placed some limits on what information could be shared with who, as well as put laws in place to govern the credit industry and protect consumers. Retail Credit Company suffered a bit of an image problem, but by 1975 they had successfully re-branded as Equifax.

TransUnion was the second of the Big Three to come along. Founded in 1968 as the holding company of Union Tank Car, a rail transportation equipment company, TransUnion jumped into the credit sphere in 1969 when they began acquiring regional and major city credit bureaus. They’ve grown over the years to the point where they now have over 250 offices across the U.S., as well as in 24 other countries.

Experian is the latecomer to the Big Three. They were founded in 1980 in England as CCN Systems. They expanded to the United States in 1996 by acquiring a company called TRW Information Services. They’ve continued to grow their operations to the point where they now have a presence in 36 countries.

Credit in the Internet Age

With the dawn of the internet age, credit bureaus now offer the ability for consumers to view their credit reports online, as well as give them access to dispute incorrect items that may have shown up on their credit. In the past, this process would have to be done by mail.

Consumers can also now get a free annual credit report from each of the big three agencies through the government’s website at AnnualCreditReport.com. There are also ways to get a look at your credit score from one of the three agencies via other free or paid services more than once a year, so it’s easier than ever to for you to determine how good, or bad, your credit situation is.

This article is part of the Go Banking Rates Financial Literacy Movement, helping Americans get smarter and grow richer. Take our Perfect Credit Score Quiz to test how knowledgeable you are! 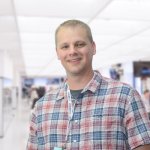 Peter Anderson has a Bachelor's degree in communications from the University of Minnesota and has been writing about financial topics for over a decade on his site, BibleMoneyMatters.com, as well as being featured on sites like Forbes, Time Business & Money, and NPR. He has a passion for helping people to make informed decisions with their money, and focuses his writing on general personal finance topics, investing and retirement.