Bitcoin Bulls Argue for Crypto as a Hedge Against Soaring Inflation 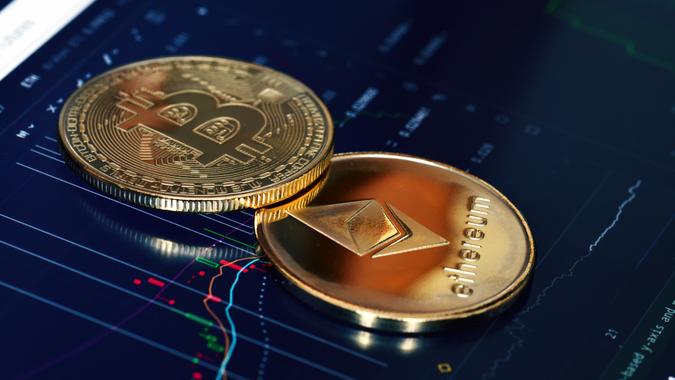 The Consumer Price Index for All Urban Consumers (CPI-U) increased 0.8% in November, the Labor Department — specifically the Bureau of Labor Statistics (BLS) — reported on Dec. 10, and the all items index rose 6.8% for the 12-month period ending November as well. This latest round of inflationary pressure represents the largest 12-month increase since the period ending June 1982, per the BLS. In turn, these figures are bolstering Bitcoin proponents’ case that cryptocurrency, just like gold and silver, can be considered as a hedge against inflation.

In an economy racked with rising inflation, could crypto be as solid a hedge as Bitcoin backers suggest?

Brock Pierce, chairman of the Bitcoin Foundation, told GOBankingRates that “the inflation numbers came as no surprise to many in the crypto world.”

“While Bitcoin and cryptocurrencies have seen some volatility from the moves in the broader stock market, they have also already been serving a purpose as an inflation hedge in many countries around the world,” Pierce said. “We should expect to see the status of Bitcoin and cryptocurrency continue to improve as inflation rises around the world in the future.”

The sentiment was echoed by Josh Goodbody, COO of Qredo, a network of digital asset custodian tools for financial institutions. Goodbody told GOBankingRates that given Bitcoin’s deflationary nature, it should function as a hedge against increasing inflation.

“Using any long or medium-term timeframe, it clearly has successfully functioned as an inflation hedge,” Goodbody added. “Since its inception, Bitcoin’s value has increased thousands of percent. More recently, crypto assets have tended to correlate tightly with Tech stocks, and the fall in stock prices has had a negative impact on Bitcoin’s price. However, this, when viewed over a yearly trend, is a short-term correction.”

Bitcoin bulls have continuously argued that Bitcoin can act similarly to gold as a hedge against inflation. Reasons cited by said experts are some particular cryptocurrencies’ built-in scarcity — there will never be more than 21 million Bitcoin in circulation, for example — and the fact that Bitcoin isn’t strictly tethered to any one country or fiat currency.

“Bitcoin is still seen as an inflation hedge, especially for younger investors,” said Matt Maley, chief market strategist for Miller Tabak + Co. “Since it has few restrictions right now, it is seen as a flight to safety asset for some investors.”

Is Gold a Good Hedge Against Inflation?

Learn: The ’12 Days of Christmas’ Will Cost You Over $40K in 2021 — How Inflation Is the True Grinch
Explore: How Much Money Should You Budget for Home Maintenance in 2022, Based on Inflation?

In terms of gold, Edward Moya, senior market analyst for OANDA, stated that the metal is “slowly getting its mojo back after a hot inflation report mostly matched estimates.”

“A lot of the inflation is stickier than anyone wants and that should keep gold’s medium- and- long-term outlooks bullish. Gold just needs to survive a firm consensus on how many rate hikes the Fed will start off with next year,” Moya wrote in a recent note.