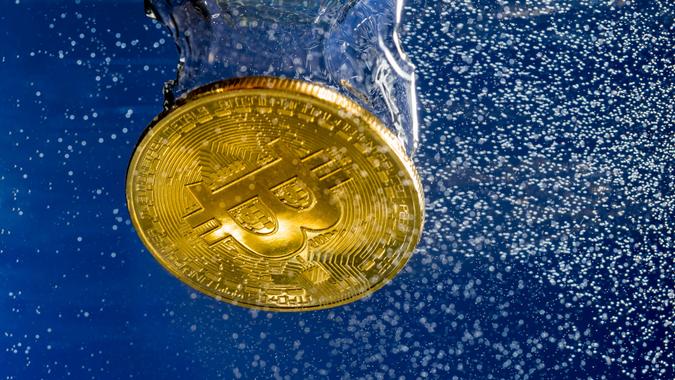 Bitcoin dropped below $50,000 today, and other cryptos also plummeted, erasing about $200 billion of the value of the crypto currency market, according to CNBC. Bitcoin’s market cap also dipped below $1 trillion, according to CoinMarketCap.

See: Bitcoin’s Plummet Gives an Opportunity to Buy the Dip
Find: Want to Invest in Bitcoin but Don’t Know How? We’ve Got You Covered

The crypto market reacted partly to the expectation of President Biden’s plan to raise taxes on the wealthiest Americans, including the largest-ever increase in levies on investment gains, Reuters says.

The plan is expected to be unveiled during Biden’s address to Congress next Wednesday and would call for increasing the top marginal income tax rate to 39.6% from 37%, Reuters says, adding that it would also nearly double taxes on capital gains to 39.6% for people earning more than $1 million.

In addition, Biden is expected to raise long-term capital-gains tax for the wealthiest Americans to 43.4%, including a surtax, according to CNBC.  The taxes are intended to help pay for the $2 trillion infrastructure American Jobs Plan unveiled earlier this month.

See: 6 Ways You Might Be Eligible for a Tax Write-Off
Find: How the IRS Taxes Cryptocurrency – and the Loophole That Can Lower Your Tax Bill

Bitcoin fell almost 10% in the past 24 hours, according to CoinMarketCap, as the tax-hike chatter triggered a panic sell off. According to CNBC, analysts said fears over Biden’s capital gains tax proposal may be extending to crypto investors, who have had a great year with the price of Bitcoin having climbed more than sixfold in the last 12 months.

“Bitcoin is up 575% compared to the same time last year,” Ben Weiss, CEO of CoinFlip, the largest crypto ATM, tells GOBankingRates. “While the latest dip has people concerned over whether the bull market has ended, volatility and small setbacks like this are just the natural state of the cryptocurrency market.”

Weiss adds that while we don’t know what direction the market will head in the near future, “we know that there is a lot of bullish news in the next few months, including Venmo adding crypto and Ethereum’s much anticipated London hard fork which will make Ethereum much more usable for retail investors. Dips like this are great buying opportunities, as long term, we know that crypto will play a bigger and bigger part in disrupting the traditional financial markets.”

See: All About Ethereum (ETH) — To Help You Decided If It’s Worth the Investment
Find: 14% of Americans Own Crypto Right Now – Here’s Who’s Actually Doing It Right

Tom Wheelwright, CPA and author of Tax-Free Wealth, tells GOBankingRates that “if the goal is to lock in gains, it’s no surprise that many investors are selling now, it makes sense to avoid the increased tax. If the goal is buy and hold, then the sale could make sense as investors could then go back in and buy with the higher basis to lock in the lower rates.”

Bitcoin has had a meteoric year and topped $64,000 earlier this month, on the day of the much-anticipated Coinbase initial public offering, according to CoinMarketCap.

See: Coinbase, the Largest US Cryptocurrency Exchange, Goes Public – ‘It Will Infect the Financial Universe with a Bad Case of FOMO’
Find: What Is Chainlink and Why Is It Important in the World of Cryptocurrency?

The crypto was also boosted by increased institutional interest lately. Recently, both Morgan Stanley and Goldman Sachs said they will start offering exposure to Bitcoin and other cryptos to their wealth management clients.

The global crypto market cap — dominated by Bitcoin — was standing at $1.81 trillion this morning, a 11.72% decrease over the last day, according to CoinMarketCap.