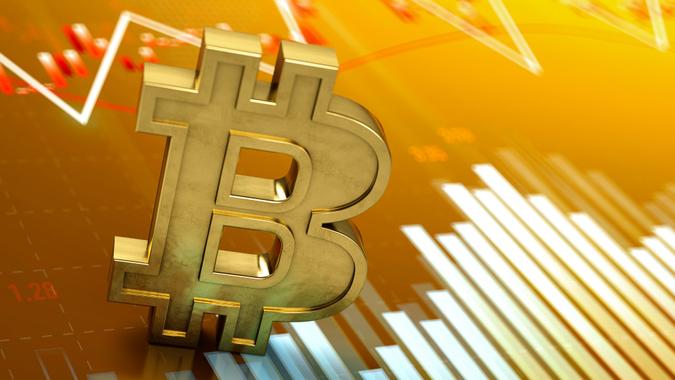 Despite 2021 having been a wild ride for cryptos — and Bitcoin finishing the year lower than expected — the crypto outperformed both gold and the stock market for the third year.

See: 8 Best Cryptocurrencies To Invest In for 2022
Find: These Are the Stocks Warren Buffett Bought and Sold in 2021

In comparison, the S&P 500 index surged 28%, and gold dropped by 7% in the same period, marking the third consecutive year that Bitcoin has outperformed the two, according to Cointelegraph, citing a report by Arcane Research.

Hayden Hughes, CEO of crypto social trading platform Alpha Impact, told GOBankingRates that it’s not much wonder that Bitcoin has outperformed gold, as it’s easier to buy, sell and trade, has a zero carry cost, and can be sent across the globe interchangeably in seconds.

Hughes noted, however, that similar to tech stocks and other risk on assets, Bitcoin is likely to be affected by increasing interest rates.

“However, we’ve seen sustained interest in BTC, with billions in assets under management flowing toward it and other assets. Many institutional investors see BTC as a hedge not in isolation, but in conjunction with a well-diversified portfolio,” Hughes said. “Similar to gold in the 60s and 70s, BTC is in price discovery mode as the market ascribes a place in the modern portfolio to it. Citibank and other banks have posited that the true value for BTC will exceed 100K or even 300K.”

Bitcoin has garnered increased interest this year, thanks to several factors, notably the rise of retail investors, institutional adoption by many big name financial institutions, and the launches of several Bitcoin-linked exchange traded funds (ETFs).

Indeed, on Dec. 10, the Labor Department reported that the Consumer Price Index for All Urban Consumers (CPI-U) increased 0.8% in November, and the all items index rose 6.8% for the 12-month period ending November as well. This latest round of inflationary pressure represents the largest 12-month increase since the period ending June 1982.

Michal Cymbalisty, founder of Domination Finance, a non-custodial, decentralized exchange for dominance trading, told GOBankingRates that Bitcoin is now a mainstream asset, having reached roughly $1 trillion in market capitalization, and it is clearly a better investment than gold and many other traditional assets.

“Because Bitcoin has reached this level, institutional investors now see it not as a niche asset but, rather, as an asset that has reached enough legitimacy that it’s worthy of getting exposure to,” Cymbalisty said. ” Below that $1 trillion threshold, most corporate executives and boards stay on the sidelines. Because of this entry by corporations, hedge funds, pension funds and even nation-states, Bitcoin’s price is on this steady, slow-grind upwards trend despite temporary pullbacks.”

The Santa Claus Rally: How Its Best Start in 20 Years Could Affect Your Stocks
Stock Market Hours New Year’s Eve: Is the Stock Market Open on New Year’s?

He added that the adoption rate of Bitcoin is now so rapid — almost twice the pace of which the internet itself was adopted — that steady annual price gains of 75%, 100% and higher look possible if not entirely likely.

“As compared to gold and other assets, I suspect that people will increasingly see Bitcoin as a safer and more reliable investment in terms of storing wealth while also getting solid returns in terms of price movements,” he said.