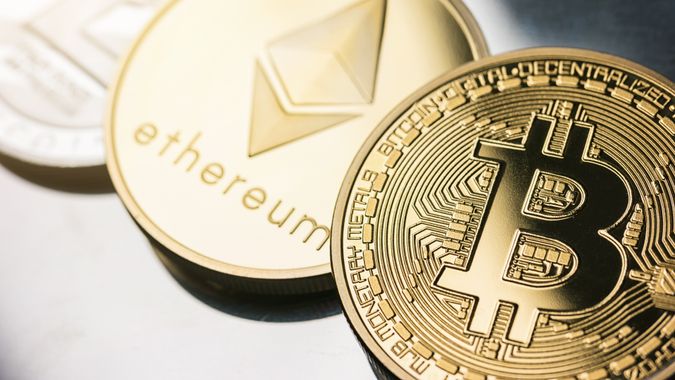 There’s a lot of hype surrounding Bitcoin these days, especially now that it’s hovering just under the $50,000 mark. Unless you’re Elon Musk, that’s a pretty steep investment. If you don’t have a few extra million lying around to invest in Bitcoin, consider these other blockchain stocks which are less expensive but still packed with potential.

Blockchain is a digitized ledger that records information in a decentralized location, allowing parties to send payments or data without having to go through a third party, such as a bank. It’s called blockchain because all the transactions are sorted into blocks. Only one block can be added at a time, and every block contains mathematical proof that guarantees it comes next in the sequence.

Because every block rests on every other block that came before it, it’s more secure. You can’t alter the most recent block without also tampering with the mathematical formula of every other block. Blockchain has some advantages:

Bitcoin is a digital currency that uses blockchain technology, but it’s not the only player in the game. If you want to get in on the blockchain action, here are the five stocks you should look at.

Riot Blockchain (NASDAQ: RIOT) focuses on Bitcoin mining. Mining involves adding transaction data to the global public ledger of past transactions. Riot Blockchain intends to be the largest and lowest-cost producer of Bitcoin in America. It just appointed a new CEO, Jason Les, but he’s served on the board since 2017 and plans on upgrading and expanding the company’s mining technology.

Square Inc (NASDAQ: SQUARE) operates a peer-to-peer cash trading app that allows you to pay anyone from your waiter to your therapist. It also features payment processing for small businesses. Square allowed customers to start using Bitcoin in 2018, and it seems to have added value to Square, since it’s shown a 140% increase in revenue in the last quarter of 2020.

Square has invested $170 million in Bitcoin, and the CEO, Jack Dorsey is a personal fan of digital currency. The company has its own team of cryptocoin developers, called Square Crypto, which is working on several projects.

Blockchain has progressed from an open-source technology to becoming a major component of finance, supply chains, and even film and voting systems. Bitcoin outperformed every other asset class in 2020, and since the adoption of bitcoin and blockchain is increasing, it’s a good investment to make in 2021. Bitcoin was created in response to the 2008 financial crisis, which some say mirrors the financial environment created by the COVID-19 crisis.

Visa (NASDAQ: V) has been investing in blockchain technology since 2016. It has developed Visa B2B Connect, which processes cross-border corporate payments using blockchain. It also has Visa Fintech Fast Track, which uses crypto-wallets to help users pay at more than 70 million merchants globally along with buying and selling Bitcoin.

Similar to Riot Blockchain, Bit Digital (NASDAQ: BTBT) is a Bitcoin mining company operating in the U.S. and China. Right now, the stock price is relatively affordable, but the company has exploded onto the blockchain landscape, which could make for big gains. It is currently one of the largest Bitcoin mining companies listed on NASDAQ. The stock price has gone from 28 cents per share to $33 per share just over the last year, fluctuating with the price of Bitcoin.

IBM (NASDAQ: IBM) has been slow to adapt to the software and internet services that dominate the market today, but it’s betting the IBM Blockchain platform will help improve efficiency and reduce risk. IBM is stable, so if you want to dip your toes in the blockchain pond, it might be a good place to start.

Amazon is not only the biggest retail site on the planet, they also host the largest cloud-based service. Right now, you can indirectly use bitcoin to pay for Amazon goods by using bitcoin to purchase prepaid Amazon gift cards, but there’s also some indication Amazon plans to launch their own cryptocurrency project with Mexico as the pilot country. It would allow customers to convert money into digital currency and then spend it on any of the services or goods Amazon provides.

Blockchain technology has generated a buzz around Wall Street, but be careful before you jump in. Some experts think that Bitcoin and blockchain are part of an investing bubble. It’s usually a smart idea to diversify your portfolio, so if you can afford it, transferring some of your assets to blockchain stocks may pay off. Just don’t invest more than you can afford to lose.