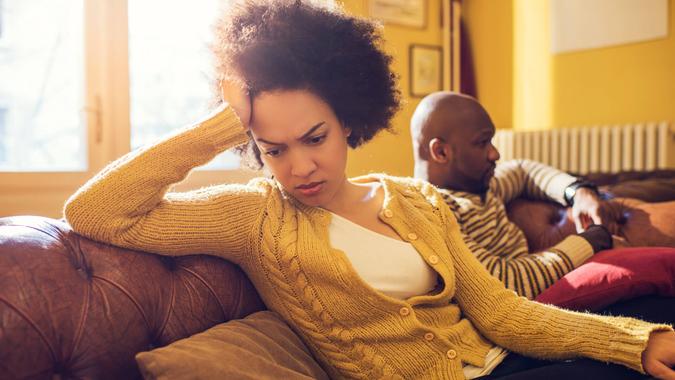 In a sign of the times, a new issue is facing Americans who are starting divorce proceedings: Who gets to keep the cryptos? While common issues such as splitting assets and houses, child custody and even pet custody, can already be complicated, adding cryptos to the mix is an increasing concern and makes the situation thornier.

See: 40 Money Secrets Only Divorce Attorneys Know
Find: Millennials Own More Crypto Than Any Other Generation

A recent survey by crypto exchange Gemini notes that roughly 14% of the U.S. population owns cryptocurrency, translating to 21.2 million U.S. adults who own cryptocurrency. And as investing and owning cryptocurrency is becoming more common, the issue of properly distributing this marital asset when parties divorce is becoming more prevalent, Sandra Radna, divorce lawyer and author of “You’re Getting Divorced…Now What?: The Ultimate Divorce Court Guide,” tells GOBankingRates.

Radna explains that the first step is to know whether there was an investment in cryptocurrency during the marriage.

“If you don’t know for sure, it may be enough to suspect crypto assets if there is a smaller amount of assets than expected when the income of the parties is high,” Radna says. A divorce attorney will know what to do to obtain the information that a forensic accountant or forensic computer analyst would need to confirm the crypto marital asset, she adds.

See: Divorced in Retirement? 20 Ways to Maintain Your Financial Independence
Find: Can I Buy Crypto With a Credit Card?

“For example, the attorney, can secure the computer hard drive, bank and credit card statements, tax returns, loan applications, and request paper wallets, software wallets and hardware wallets, all of which may contain proof of crypto investments and assets through the court system. The divorce attorney may also subpoena exchanges — such as Coinbase or Binance — if the exchange is located in the U.S.”

Radna argues that the important thing to remember is that even if a spouse claims they no longer own crypto, the investigation should continue to determine if the original crypto was used to purchase some other type of crypto or other asset once your attorney has the information concerning the initial transactions. If yes, that purchase would also be a marital asset subject to distribution, she says.

Another complex issue when it comes to splitting cryptos is how to value them. Most spouses and most divorce attorneys are still uneducated as to how crypto works, how to track it and how to value it.

“It is certainly possible and easier to hide investments in cryptocurrency than it is almost any other type of financial investment save cash or some other type of physical, easily concealable asset,” says Kelly Burris, senior litigation partner at Cordell & Cordell.

“Exchanges do not usually provide any kind of financial statements, and coins or tokens are easily moved and held outside of exchanges. Furthermore, cryptocurrency can be extremely difficult to value due to the volatility of the market. For example, Bitcoin recently took a nosedive and in less than a one month period dropped in value over $29,000.00. That can have a severe impact on the division of a marital estate in a divorce,” she adds.

Howard Dvorkin, certified public accountant and chairman of Debt.com, says that as a CPA who’s counseled many couples on their finances, he’s seen divorces get nasty over money. “But at least they’re arguing over something that can easily be divided. I’ve seen divorces get even uglier over items that can’t be split — like who gets the nice car or the family dog,” he tells GOBankingRates.

See: The Most Expensive States to Get a Divorce
Find: 10 Major Companies That Accept Bitcoin

Cryptocurrency combines the worst of both worlds, according to Dvorkin, as both parties know it’s valuable, but it’s also so complicated, it can’t be equitably divided without complex calculations and expert advice, he adds.

“Anyone who’s been around divorce proceedings knows that emotions are so raw, any perceived slight can turn an amicable separation into open warfare. Cryptocurrencies are so complicated, misunderstandings will explode into allegations — which might be true if one spouse grasps how to manipulate the currencies to their benefit,” he says. “Bottom line, I expect cryptocurrency to make divorces tougher across the board, as it sows suspicion that bleeds into the rest of the proceedings.”