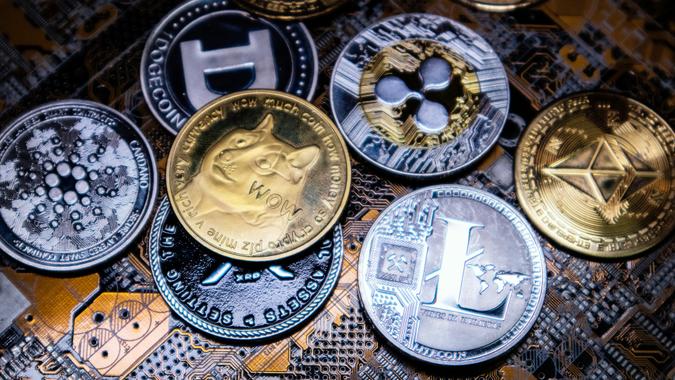 Cryptocurrency has boomed in popularity over the past few years, to the point that the alternative investment class has essentially gone mainstream. While Bitcoin was the first and still remains the best-known cryptocurrency, literally thousands of other cryptos have entered the scene. Part of the reason for the hype surrounding the asset class is the tremendous returns that have been earned by some investors. Bitcoin, for example, was the best-performing asset from March 2011 to March 2021, with a staggering 230% annualized return. The next best-performing asset class over that time period was the Nasdaq-100 ETF, symbol QQQ, with “just” a 20% annualized return. But, what’s to come for the rapidly growing cryptocurrency market? Here’s a look at some of the most popular cryptocurrency predictions for 2022.

Ethereum is not as widely known as Bitcoin, but it should be. Currently, Ethereum is the second-largest cryptocurrency, and its gains have been outpacing Bitcoin’s. If current trajectories continue, Ethereum may very well overtake Bitcoin as the most valuable cryptocurrency sometime in 2022. This might make Ethereum an interesting choice for investors looking to diversify their crypto portfolios away from simply owning Bitcoin.

Economy Explained: Ethereum: All You Need To Know To Decide If This Crypto Is Worth the Investment

Cryptos Will Become More Accepted as a Payment Source

One of the major bear cases against cryptocurrency is that it’s not accepted as a viable substitute for traditional currencies. If this scenario plays out, many cryptocurrencies may indeed become worthless. However, just the opposite has been happening in 2021, and the trend seems likely to continue into 2022. As more and more businesses begin accepting cryptocurrency like Bitcoin as legal tender, both the viability and the value of cryptos will likely increase.

Consider: Dogecoin: Is It Still Worth an Investment?

In September 2021, El Salvador became the first country to adopt Bitcoin as legal tender. Alexander Höptner, the CEO of the crypto exchange giant BitMEX, feels that five or more countries could follow suit in 2022 and adopt crypto as legal currency. If these adoptions prove to be successful, it’s likely that other countries may look into adopting crypto as well.

Central Banks Will Issue Their Own Digital Currencies

Investors and Companies Alike May Raise Their Crypto Allocations

As cryptocurrency becomes more mainstream, it’s being adopted with more regularity into the portfolios of both individual investors and companies. Some financial advisors now recommend cryptocurrency allocations of a few percentage points, and more companies are allocating cash to cryptos and digital assets. These types of allocation shifts tend to take on their own momentum, meaning more and more money is likely to be flowing into cryptocurrencies in 2022.

Some, and Perhaps Many, Cryptos Will Become Valueless

While general trends toward the acceptance of cryptocurrency seem to be increasing, with thousands of cryptos out there all competing for a space in the industry, it’s inevitable that some, if not many, will lose all of their value. Industry leader Bitcoin still has plenty of major investors lined up against it, suggesting that ultimately the value of Bitcoin will be $0. If the largest and most well-known cryptocurrency topples, there likely won’t be much support for the thousands of lesser cryptos that are not nearly as useful or accepted.

Although cryptocurrencies have exploded in visibility and valuation, they’re still a long way from being used as mainstream currencies or sources of payment. Even if digital currencies do eventually supplant or at least co-exist with traditional paper currencies, it’s difficult for investors to predict exactly which cryptocurrencies will survive, let alone which one will be the dominant long-term player in the industry. Still, it seems quite likely that cryptocurrencies will continue to make gains in usage, visibility and even valuation in 2022. While not all of the predictions on this list will come to pass, it’s likely that at least a few of them will. If you want to participate in this emerging market, consult with your financial advisor to determine if cryptocurrency should play a role in your investment portfolio.