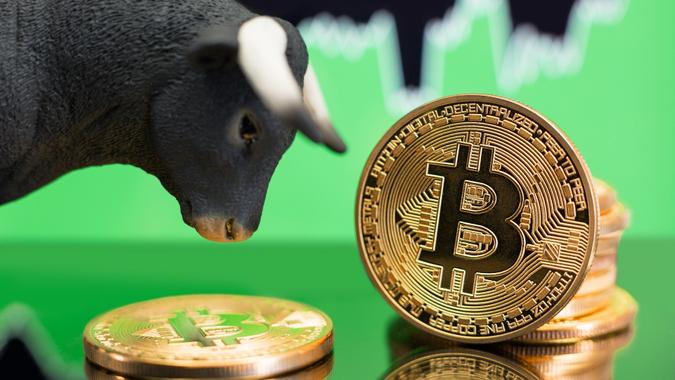 Bitcoin dropped below $60,00 yesterday, following a couple of weeks hovering near $70,000 thanks to the launch of two Bitcoin-linked exchange traded funds (ETFs) which sparked a frenzy.

Learn: 8 Best Cryptocurrencies To Invest In for 2021
Coinbase Fees: Here’s a Full Breakdown of How To Minimize Costs

Indeed, digital asset investment products saw inflows last week totaling $1.47 billion, the largest on record by a significant margin, with Bitcoin representing 99% of the inflows, totaling $1.45 billion last week, according to Coinshares. The record inflows were a direct result of the Securities and Exchange Commission allowing a Bitcoin ETF investing in futures and the consequent listing of two Bitcoin investment products with inflows totaling $1.24 billion, Coinshares added.

Today, Bitcoin is around $58,000, according to CoinMarketCap.

“While Bitcoin is a leader in the crypto space, and oftentimes deemed as a ‘health test’ for the multi-trillion-dollar industry, it doesn’t mean that just because its valuation dips that there should be any cause for investor concern,” Ron Levy, CEO and co-founder of the Crypto Company, told GOBankingRates. “Like the traditional market, cryptocurrency’s volatility is just part of the risks involved in investing.”

Levy put the situation into perspective, saying that the dip is a 5.4% drop in the last 24 hours on Bitcoin, which is up more than 350% over the last year.

“For Ethereum, it’s a 4.6% drop after a one-year increase of more than 900%. For those that are in it for any significant period of time, as opposed to gains on daily trading, this is still very much a bull run,” Levy said. “The bottom line is that we have an asset class that has gone from $776 billion on Jan 1 this year, to nearly $2.5 trillion today. In my opinion, ‘We ain’t seen nothin’ yet’.” This is wealth creation that is open to everyone and anyone to share in, no matter if you have millions to invest or a few dollars.”

How To Invest In Bitcoin: 4 Steps To Get Started
See: New Crypto Copy-Trading Platform Helps Those ‘In the Know’ Guide Beginners Toward Success

“The underlying scarcity principles of bitcoin remain despite the market’s volatility, Vicuna told GObankingRates. “Most investors see bitcoin as a hedge against inflation and a store in value — that underpinning has not changed. Bitcoin is still a young asset class. As the market matures, there will be more stability with less dramatic pull-backs. But for now, I see the long-term forecast for bitcoin very bullish.”