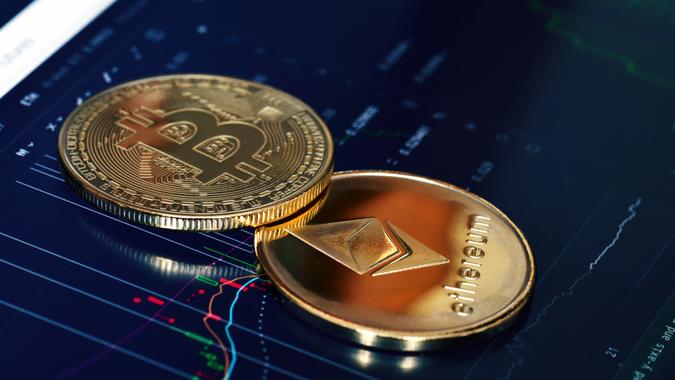 Cryptocurrencies, also known as digital currencies, seem to be all the rage in 2021. Coins like Bitcoin have skyrocketed in recent years, and financial institutions are starting to get on board. Two of the largest and most popular coins are Ethereum and Bitcoin. This article explores and compares both cryptos and will help you understand the pros and cons of each so you can determine which one might be right for you.

A cryptocurrency is a secure, virtual currency that is nearly impossible to counterfeit. Digital coins are assets that are on distributed networks. This decentralized nature means that governments or central authorities can’t control them.

Blockchain technology, which is a technology based on a distributed ledger database, underpins many cryptocurrencies. Cryptography and encryption techniques secure the network and prevent tampering. Every transaction is stored as a separate block on the chain, and those records are guaranteed to be accurate and immutable.

Ethereum and Bitcoin are arguably the most popular cryptocurrencies on the market today. They certainly are the largest cryptos by market cap. Bitcoin’s market cap is over $700 billion, while Ethereum’s market cap is around $287 billion.

Bitcoin was the first cryptocurrency, launched by an anonymous crypto architect in 2009 named Satoshi Nakamoto. The idea for this digital currency was simple yet revolutionary. It promised a decentralized and transparent financial system accessible to all.

Bitcoin works on a blockchain network. Cryptography ensures both the integrity and the chronological order of transactions. The longest chain is the correct one. Transactions happen between Bitcoin wallets using private keys, which provide mathematical proof of their authenticity.

Like Bitcoin, Ethereum is a decentralized, peer-to-peer network that snubs censorship and surveillance. The focus of the project is to enable access to financial services and commerce for everyone. Notably, Ethereum is currently the most actively used blockchain in the world.

The main difference between Ethereum and Bitcoin is the fact that Ethereum is programmable. That feature broadens the scope of Ethereum, making it more than just a digital currency. It makes Ethereum a marketplace for financial services, games and apps that can’t spy on or censor you.

The fear of missing out is a powerful driver for people to buy cryptocurrencies. With Bitcoin’s explosion in value to recent highs of over $60,000, it’s easy to get caught up in the hype. No one wants to lose out on the chance of getting rich from crypto, especially when crypto has already made many people extremely rich.

However, regulators continue to warn the public that you could lose all your money in crypto. For example, Bitcoin’s price has dropped by nearly half since those recent highs earlier this year.

Because cryptocurrencies are digital assets, they’re potentially vulnerable to hackers. There have been several notable hacks on exchanges, including a loss of $40 million from Binance, one of the largest exchanges. Hackers stole millions of Ether from South Korean exchange Upbit in 2019. Analysts also warn that quantum computers could hack crypto wallets, even though the technology isn’t mainstream yet.

The IRS wants to know about your crypto gains. There’s a new tax question on Form 1040 specifically regarding cryptocurrencies. Failing to disclose this information could lead to stiff penalties or possible criminal investigation.

Both Bitcoin and Ethereum have increased in value since their release. Determining which one’s right for you depends on your needs and goals.

Bitcoin is the most popular cryptocurrency and has the most support commercially. Even PayPal now has crypto capabilities built into its platform. If you’re looking for a cryptocurrency alternative to fiat currency, Bitcoin seems to be a good choice.

Bitcoin Has a Finite Supply

Bitcoin has a finite supply of 21,000. Once that cap has been reached, no more bitcoins can be created. Investors consider this a store of value and hedge against inflation.

Even though Bitcoin is the oldest and largest cryptocurrency, the industry is still new and the project is still under development. Even the official project admits that there could be growing pains like increased fees, slower transactions or significant technical problems.

Ethereum Does Not Have a Limited Supply

Unlike Bitcoin, Ethereum doesn’t have a limited supply. Therefore, experts say the coin shouldn’t have any deflationary effect. This is by design and potentially a disadvantage for the platform.