GameStop Solidifies NFT Platform Plans — Should You Buy the Stock? 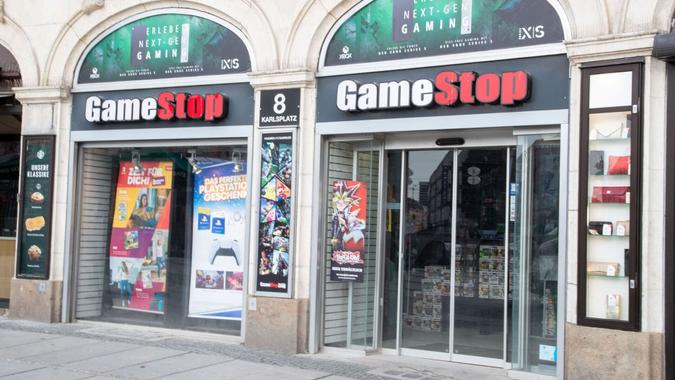 GameStop — a company which reached somewhat cult-like status among redditors by becoming a so-called meme stock — has solidified its plans to launch an NFT platform. The move comes in an apparent effort to turn around its business in 2022.

See: Moderna, GameStop and 8 More of the Hottest Stocks of 2021
Find: How To Make a GameStop Credit Card Payment

Rumors started in November as to when the GameStop NFT launch might happen, discussion starting in earnest when the company posted a slew of NFT-platform and Web3 gaming jobs on its career page, as GOBankingRates previously reported.

The company also has a bare-bones website dedicated to an NFT platform, where you can “request to be a creator on the GameStop NFT Marketplace.”

GameStop has hired more than 20 people to run the unit and the company is asking select game developers and publishers to list NFTs on its marketplace when it launches later this year, according to The Wall Street Journal.

In addition, the company is also set to sign partnerships with two crypto companies — seeking to share technology and co-invest in the development of games that use blockchain and NFT technology, as well as other NFT-related projects — The Wall Street Journal adds.

Related: Is Your 2021 NFT Transaction Taxable?

GameStop CEO Matt Furlong hinted at the plans on a Dec. 8 investor call, saying “we believe our emphasis on the long term is positioning us to build what will ultimately become a much larger business relative to where we are in 2021. We’ve also been exploring emerging opportunities in blockchain, NFTs, and Web3 gaming,” according to a Motley Fool transcript of the call.

It’s been a record year for NFTs, as the global market value of these digital investments has hit $23 billion, according to blockchain analytics firm DappRadar. The term has even been named Collins’ Word of the Year for 2021 — and now, NFTs’ value is surpassing the market cap of some publicly traded companies.

However, some experts say investors should proceed with caution.

“Should people buy GME shares after it announced plans to expand into NFTs? If they are looking for a good investment, they should avoid GME. After all, GME has lost 74% of its value since peaking about a year ago,” Peter Cohan, a senior lecturer at Babson College and author of “Goliath Strikes Back,” told GOBankingRates.

“If they are looking to make a quick buck trading, I would also avoid the shares. After all, The NFT announcement is sending its stock up 20% in pre-market — so it is probably too late to catch that wave. I could be wrong but NFTs strike me as a joke that will be less funny if people put real money into them and then it evaporates.”