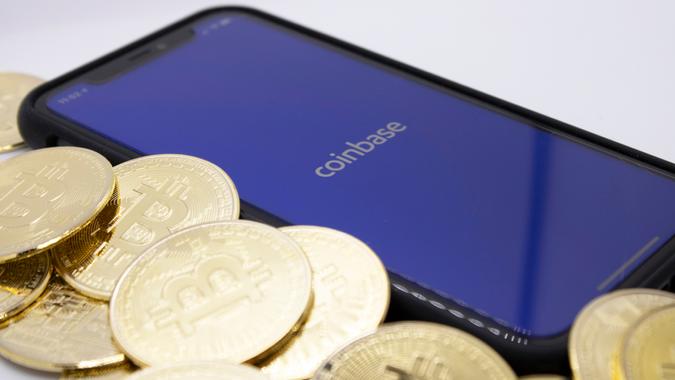 Coinbase is continuing to struggle, with analysts now downgrading its stock, saying it’s time to sell as the crypto winter is taking hold of the entire industry.

See: What Is a Crypto Winter?
Bear Market: When Will It Be Safe To Invest In Stocks Again?

Goldman Sachs analyst Will Nance downgraded the stock to a Sell from a Neutral rating on June 27, “given the continued downdraft in crypto prices and the resulting fall in industry activity levels,” according to a note sent to GOBankingRates.

“We believe current crypto asset levels and trading volumes imply further degradation in COIN’s revenue base, which we see falling ~61% YoY in 2022, and ~73% in the back half of the year,” Nance wrote in the note. “While COIN recently announced a significant restructuring, laying off 18% of its workforce, we believe further cuts are needed, as the announced cost reduction effort merely brings headcount back to end-1Q22 levels and resulted in COIN moving to the low end of its previous expense guidance.”

On June 21, Coinbase rival Binance.US announced it was bringing zero-fee trading to all new and existing customers to trade Bitcoin against the dollar, Tether, USD coin and BinanceUSD. This brought the stock of several of its rivals down — including Coinbase. The move, amid a crypto winter that led to massive layoffs at several cryptocurrency firms, might also indicate the start of a price war and a potential consolidation of the industry.

On June 22, Coinbase announced in a blog post that it was shutting down Coinbase Pro — a tool for advanced traders to conduct technical analysis and place trades — which it had launched in 2018.

Ming Duan, co-founder and chief operating officer of Umee, a cross-chain borrowing and lending Defi protocol, told GOBankingRates that Binance’s recent announcement seems to be a strategy for staying ahead of the competition.

“Coinbase shutting down their trader platform, Coinbase Pro, might have been a signal for Binance to come up with something to bring in more consumers and keep them happy. Anytime a company offers a service without extra fees, consumers are definitely going to use that service and enjoy not having to spend any extra money,” Duan said.

Indeed, the effects of the crypto winter are rippling across the entire industry. Earlier this month, Coinbase was the latest crypto giant to announce layoffs. The company announced it was laying off 18% of its staff “to ensure [they] stay healthy during this economic downturn.”

Separately, Goldman Sachs also upgraded Robinhood to Neutral from Sell, “as we see the risk reward as more balanced,”

The upgrade was triggered by “a more balanced risk-reward, but “fundamentals are still very weak for HOOD, in our view, as continued declines in retail trading risk appetite have weighed on active users and margin balances,” Nance wrote.

See: How Converting to a Roth IRA Helps You During a Bear Market
Find: 5 Best Long-Term Cryptocurrencies To Buy for 2022

“Longer term, we believe HOOD needs to see progress on more recurring revenue streams and a return to user growth and engagement levels for shares to outperform, and while we don’t see this occurring near term, a combination of valuation support and a significant interest rate tailwind over the coming quarters are enough to move us to a Neutral rating,” he added.