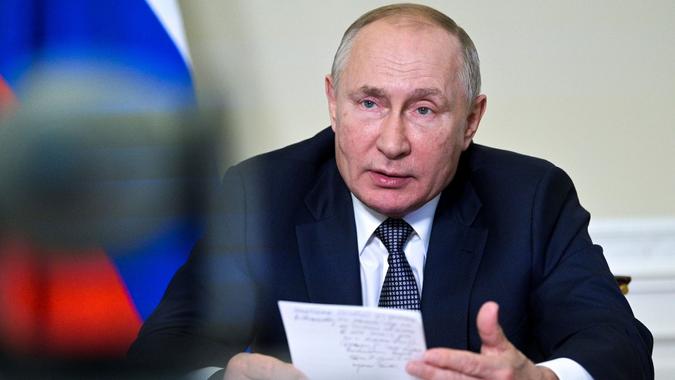 Russian President Vladimir Putin conceded in an interview Wednesday that cryptocurrency “has value” as a trade currency — just not when that trade involves oil.

Coinbase Fees: Here’s a Full Breakdown of How To Minimize Costs
Find: 10 Cheap Cryptocurrencies To Buy

His comments made headlines partly because Russian officials have hinted that the country might move away from crude contracts involving U.S. dollars if the United States keeps imposing economic sanctions.

When asked by CNBC’s Hadley Gamble at the Russian Energy Week event in Moscow whether bitcoin or some other crypto could be used instead of the U.S. dollar, Putin said it’s “too early to talk about the trade of energy resources in crypto.”

“I believe that it has value,” he added. “But I don’t believe it can be used in the oil trade.”

Putin went on to say that cryptocurrency “is not supported by anything as of yet. It may exist as a means of payment, but I think it’s too early to say about the oil trade in cryptocurrency.”

Russia depends heavily on the oil industry both as a consumer and a producer. According to the U.S. Energy Information Administration, it was the world’s third-largest producer of oil last year with 10.5 million barrels and an 11% share of the global total. Only the U.S. and Saudi Arabia ranked higher.

But just because Russia isn’t ready to pull the trigger yet on crypto as an oil currency, the country hasn’t changed its stance on the dollar.

“I believe the U.S. makes a huge mistake in using the dollar as a sanction instrument,” Putin said. “We are forced. We have no other choice but to move to transactions in other currencies. In this regard, we can say the United States bites the hand that feeds it. This dollar is a competitive advantage. It is a universal reserve currency, and the United States today uses it to pursue political goals, and they harm their strategic and economic interests as a result.”

In June, Russia said it would drop U.S. dollar assets from its sovereign wealth fund. As GOBankingRates recently reported, the country that uses crypto the most is Nigeria, where 32% of respondents reported having used or owned one type of crypto or another in 2020. Russia didn’t rank among the top 10.

Explore: New York, Kentucky Have the Most Bitcoin Miners in America — How Renewable Energy Concerns Tie In
Learn: Binance Launches ‘Biggest Growth Fund in Crypto History’ — How Could It Impact Blockchain Industry?

Here’s the top 10, based on Statista data:

In terms of overall crypto use, Russia still lags well behind much of the rest of the world.