How Much Does It Cost To Build a New House? 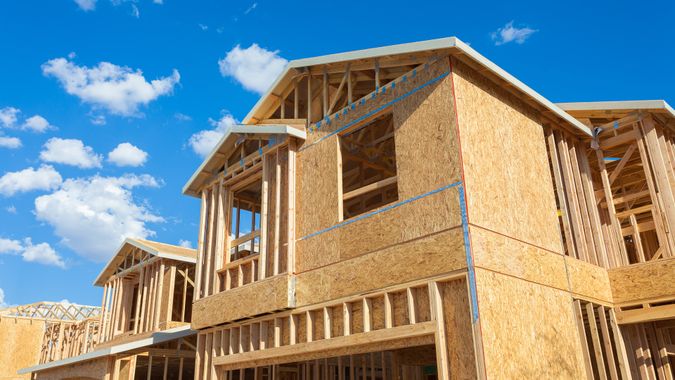 Even though it takes approximately 6.8 months to build a new house, according to the U.S. Census Bureau, choosing to go this route comes with plenty of advantages.

Small Biz, Big Impact: Don’t Miss Out on Nominating Your Favorite Small Business To Be Featured on GOBankingRates — Ends May 31

“Building new is almost always better as you can customize it for how you and your family live, and you get to use the most modern building practices,” said Ben Neely of Riverbend Homes. “While this is typically more expensive upfront, you have to consider the cost of maintenance and upkeep on an older home. Also, when it comes time to sell, your house will be newer, which typically fetches a higher selling price when comparing the used inventory.”

How Much Does It Cost To Build A House?

According to HomeAdvisor, nationally, the average cost to build a house in 2021 is $298,432, and a typical range is between $154,185 and $477,534. But that cost isn’t the same for all new homes built across the U.S. Instead, factors such as location, the materials and products you select and local labor costs can all influence the total construction cost of your new home. Plus, builders are facing increasing lumber and material costs, which they pass on to the consumer.

While it’s impossible to give a nice, round figure on what it will cost for you to build a new home, (your builder can do that) here’s a broad overview, including some cost information from builders and developers in the U.S.

According to HomeAdvisor, home design services and permits will comprise 10%-25% of new home construction costs. House plans can cost $2,000-$8,000 and if you need the services of design professionals, you can expect to pay between $50-$250 per hour. Permit costs will vary depending on location.

You’ve heard “location, location, location” when it comes to what drives up the cost of real estate. Location also holds true when you’re building a home. “The biggest driver of land costs tend to be school district and proximity to the major metro where you are,” Neely said. “Every mile you drive further away from the closest metro, the land costs tend to drop. Secondly, the topography of the lot will affect the costs as well; the flatter (easier) it is to build, the more expensive the lot will be.”

HomeAdvisor puts the cost of lots between $3,000-$150,000. The lower end of the price range would be for an underdeveloped lot in a rural area that may need clearing. In housing developments, you can expect to spend between $50,000-$100,000. Lot pricing varies according to size, location and whether sewer, water and electricity are already present or need to be brought in.

Check Out: If You Want To Buy a Home, You May Want To Get In Before It’s Too Late

And building a home is more expensive now. While you might have been able to build your dream home for a certain amount per square foot a year or so ago, it will likely cost more now. “Over the past year, we have had to increase our prices by about $30/square foot,” said Whitney Hill, head of business development and operations for SnapADU. “On a home of 1,200 square feet, that’s [an additional] $36,000.”

You’ll typically spend between $25,000 and $65,000 on lumber when building a new home, according to HomeAdvisor. But lumber prices have skyrocketed since the pandemic began, so the cost will likely be higher.

Learn: Houses Are Selling the Fastest in These 10 Real Estate Markets

“Lumber prices have reached astronomical and unprecedented levels due to beetle infestations in Canada where the U.S. gets most of its lumber from,” said Thomas Jepsen of Passion Plans. “In addition, warmer weather caused by climate change has made wildfires even more frequent, further lowering the supply of lumber. We’ve seen prices go up by 200% in our local area in N.C. The typical house now costs $25,000 more to build than it did before the pandemic.”

Typically, interior finishes comprise less of your overall construction costs than exterior ones — unless you opt for high-end finishes that cost much more. You’ll spend about one-third of your budget on interior finishes — or $50,000 to $175,000 — according to HomeAdvisor.

According to Volodymyr Barabakh, co-founder and project director for BM International Builders, interior finishes make up approximately 25% of your total construction costs. “This is also the area where you have the most control over costs as they do not have as much of an effect on the long-term safety and durability of your home compared to foundations and safety. Opting for cheaper fixtures and fittings, thinner walls and less lights can greatly reduce the cost of your home without compromising its longevity. With a strong structure and frame in place, you can always renovate later.”

Discover: 10 Reasons To Think Twice Before Investing In Real Estate

Exterior finishes can cost $40,000-$60,000, according to HomeAdvisor, accounting only for exterior walls, exterior paint, windows, roofing and doors.

“A good rule of thumb is that 60% of the costs of the home are the ‘sticks and bricks,’ or the things that give your home its structure, [such as] concrete, lumber, roof and drywall,” Neely said.

According to HomeAdvisor, labor costs can eat up 30%-60% of your project costs.

“It’s hard to put a true labor number to the projects as most subcontractors we work with are ‘turnkey,’ meaning the drywaller buys and installs the drywall, the electrician buys all the boxes and wire,” Neely said.  “I would estimate the total labor costs of a home are 30-40% of the overall cost of a new custom home.”

Andrew Wilson of Contractor Advisorly has a similar estimate when it comes to labor costs. “Based on my experience, the percentage cost of labor to build a home is somewhere around 35-40%,” he said.

What To Consider When Creating Your Home Building Budget

The general consensus among building experts is that you should increase your building budget beyond what you think you’ll actually need.

“A contingency of 15%-20% should be a big consideration,” McKinney said. “Take into account that lumber prices may come down, but we’ve been saying that since last fall, so they could also continue to rise.” McKinney said that costs of other goods and the costs of hiring subcontractors have been steadily on the rise.

Find Out: How to Put In a Successful Real Estate Bid In a Hot Housing Market

Barabakh said that the biggest mistake he sees people make with their building budget is not leaving enough room for unexpected labor costs.

“For every small part of a construction project, there are dozens of factors that could lengthen the project timeline, and almost none that can shorten the timeline,” he said. “Therefore you should budget as if you are going to pay for 20%-30% additional labor costs than your original timeline.”