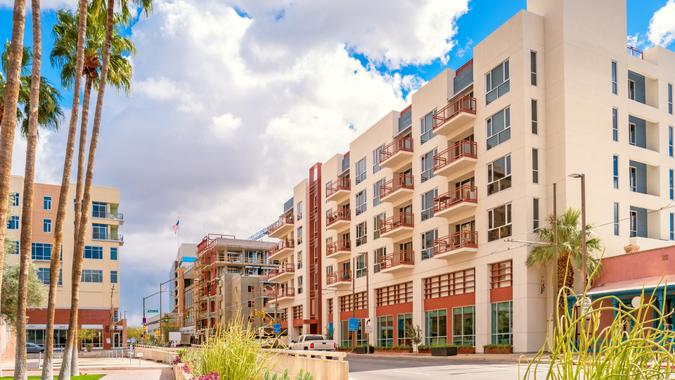 A year after landlords were forced to freeze rents and suspend evictions because of the COVID-19 pandemic, many came roaring back with a vengeance in 2021 by raising rental prices at historically high rates, according to a new report from rental platform Zumper.

See: Is Your House Not Selling? Here Are 4 Major Reasons Why
Find: Here’s How To Get Back To Renting After an Eviction

Zumper’s National Index, based on a survey of 9,057 renters across the country, found that the median rental price of a one-bedroom unit rose 11.6% over the course of the year, while the median price of a two-bedroom unit climbed 13.6%. If you want to know how steep those increases are, consider this: Rent price growth was 0.06% in 2020 and 0.3% in 2019.

Rent hikes were especially steep for residents in big cities who benefited from falling prices in 2020. These residents had “a rude awakening” this year, Zumper noted, as rental prices in some urban areas rebounded to pre-pandemic levels and in some cases set new all-time highs.

“In metro areas where single-family homes are the primary form of housing, rent has risen at breakneck speeds as skyrocketing home valuations price out more and more renters who would otherwise buy,” a Zumper press release said. “There are very few parts of the country where rent isn’t significantly higher than what it was heading into 2021.”

Among the other key findings in Zumper’s 2021 Annual Rent Report:

How long these rental hikes last depends in part on how home sales go next year. As GOBankingRates previously reported, Realtor.com’s 2022 Housing Forecast predicts that year-over-year home sales in the United States will rise 6.6% in 2022 to their highest point in 16 years.

Housing Preview: 2022 Will Bring a Continued Rise in Home Sales and Prices, Report Says
Find: The Best Time of Year To Buy a House

A separate Realtor.com report found that buying a starter home was more affordable than renting a home in 24 of the 50 largest U.S. metro areas, Nasdaq reported. Demand for rentals could ease as more Americans move out of their rental homes and into starter homes, which would put more rental units on the market. This might make some landlords wary of jacking up prices too much.