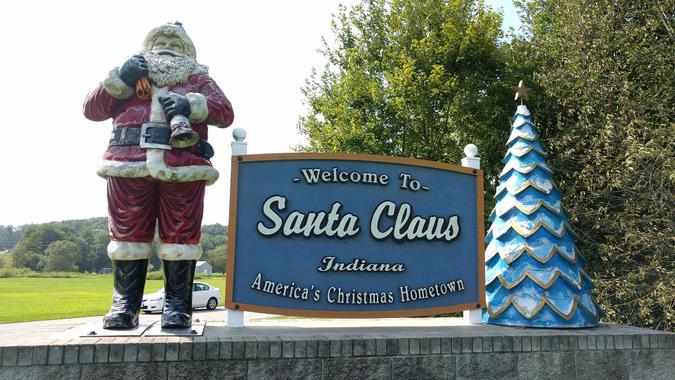 America’s housing market is in a precarious position in 2022, experiencing a marked downturn in the second half of the year that will continue into 2023, according to Fortune, citing a report by Goldman Sachs. A big part of the issue is the Federal Reserve’s move to raise interest rates to combat inflation, but in the process it’s made financing homes harder to come by for many.

Yet, the luxury housing market doesn’t seem to be batting an eye, as sprawling estates in many parts of the country are posting record-breaking sticker prices — and finding interested buyers.

Even Hawaii, which has some of the most expensive property values in all of America per reports by Ascent and Zillow, has seen a big uptick in sales. According to Pacific Business News, luxury home sales “surged” in the first half of 2022.

But Hawaii and other luxury hot spots like New York City and Los Angeles are not the only places enjoying the big ticket boost. Here are five other listings in Indiana, Montana, Georgia, New Mexico and Texas that have some real sticker shock.

The real name of this town is actually Santa Claus and it is a year-round Christmas central that attracts visitors and media alike. More than 1 million people pay a visit every year, according to the property’s listing.

There’s also eight lakes on the property and a shooting range to add to its unique features.

The Treasure State is living up to its name with recent real estate deals. Media mogul Robert Murdoch just laid down roots with the purchase of a $200 million ranch, as noted by The Guardian, which makes this nearly $40 million property in Bozeman seem like a real steal.

Dubbed Aquarius, the 23-acre estate offers a just under 24,000-square-foot residence with six bedrooms and 10 baths. It features a “contemporary industrial design” that features floor-to-ceiling glass that illuminates its natural woodsy environment (including two bordering creeks).

The kitchen includes a wood-fired pizza oven and the owners suite bath has a reflecting pool. Many rooms also have a balcony or access to a patio to take in the outdoors even more. A game room, home theater and wine cellar add to the amenities.

According to a report in Axios, metro Atlanta has been seeing housing prices rise 58% above national averages, making it one of America’s “most overvalued markets.” Certainly listings like this opulent estate in Bolingbroke, Georgia (about 70 miles outside the metropolitan area) add evidence that the rest of the state is seeing the effects too. In fact, the asking price of this palatial estate more than doubled in a year of first going to market, according to the listing.

Built in 2002, this Georgian-style property known as Great Hill Space has a yesterday feel that makes it seem historic. It sits on 329 acres and offers 13,500 square feet of space with seven bedrooms and eight full baths, and looks like it could have been presidential quarters with a lush grand staircase, painted dome, extensive carved wood features and decorative columns. The towering rotunda and rooftop deck add to the appeal. There are also horse stables and a silo-like guest house.

This “survivalist” compound was built to withstand the elements and maybe even the end days. Made of reinforced concrete, the solid structure has a number of backup generators, a self-running water supply, even a year’s worth of propane. It sits on a 312-acre ranch butting up against the Carson National Forest and comes with a number of yaks. Its designer, an expert in seismic construction, told Wall Street Journal it allows anyone the capability to live off the grid for some time.

There are also some lovely natural features like bamboo ceilings and 3,000 square feet of heated outdoor spaces as well as Brazilian soapstone floors. There’s even a large koi pond “that acts like a moat” at the front of the property, says WSJ. The news outlet says this property now bests the former most expensive house in the state that once belonged to Jeffrey Epstein.

Where are the best real estate markets in the U.S.? Five of the top 11 happen to be in Texas, according to a new report by WalletHub. As a result, prices are booming. Take this lush Austin property coming in at a cool $45 million asking price.

Located in the Lake Travis community, the estate is known as Villa Del Lago and it sits on 25 acres with seven bedrooms and 10 baths. Five fireplaces, a theater, library, wine cellar and summer kitchen add to the charm. The outdoor amenities also include a negative edge pool, hot tub and outdoor bath. There’s even a boathouse that’s convenient as it sits on the water.

If sold at its current price, it will be the most expensive house ever in the city, doubling the last record holder that sold for $21 million in 2017, according to Fox 7 Austin.