What Is an Adjustable Rate Mortgage and Why Is It Considered Risky? 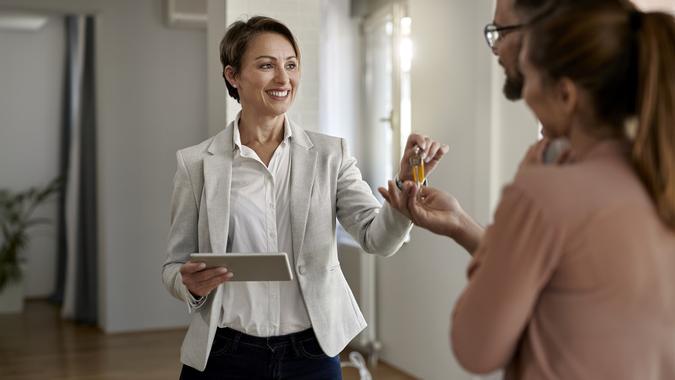 When interest rates are low, conventional mortgages rule the day. There’s no need to take a chance with an adjustable rate mortgage (ARM) if you can lock in a 3.5% or lower rate for 30 years.

But as interest rates rise, ARMs are growing in popularity. In April 2022, ARMs accounted for 10.8% of mortgage applications, according to the Mortgage Bankers Association. That’s up from 3.1% in January.

What Is An ARM?

An ARM, or an adjustable rate mortgage, is a home loan with an interest rate that fluctuates based on the prime rate. The initial rate may start out lower than a fixed rate mortgage, but if the Fed raises interest rates, the ARM will eventually go up, too. Likewise, if interest rates drop, you can save money with an ARM.

Why Are ARMs So Popular Right Now?

They are especially desirable right now since home prices have not dropped as much as many buyers would have liked, even though interest rates are rising. That means people found themselves able to afford less home for the money.

If you already placed a bid on a house and had it accepted, only to find interest rates have risen, you have two choices:

Of course, you could also walk away from the deal, but after months of house-hunting, many homebuyers are reluctant to do that. They’d be back at square one, in the same position of trying to find an affordable home. Instead, these buyers are turning to ARMs to be able to afford the house they want.

The Risks of ARMs

Today’s ARMs are a bit different from the ones of the early 2000s, which left many people underwater when the housing market crashed in 2008. But they still carry some risks.

You are taking a gamble that interest rates will stay the same or fall, rather than rise, putting you in a position where you can’t afford your mortgage payments.

Are You a Good Candidate for an ARM?

ARMs are good for some homebuyers, however. Most ARMs have a five-year fixed rate period, which means the low initial rate will stay the same for five years, according to Raleigh Mortgage Group. After that five-year period, most ARMs adjust annually, although some may adjust as frequently as monthly. Contrast this to the ARMs of the 2000s, where the industry standard was a fixed-rate period of just one year, and one can see how today’s ARMs are less risky.

If you plan to sell your home within the next five years, an ARM could be a good choice. You can purchase more house for your money, and you won’t have to worry about higher payments, since you are likely to move before the rate rises.

Discover: How To Get the Best Deal on a Mortgage as Rates Approach 6%
POLL: Do You Think a Gas Tax Holiday Would Make a Difference on Your Wallet?

Choosing an ARM is a personal decision that shouldn’t be taken lightly. It’s nice to save money or afford a bigger or nicer house upfront, but you don’t want to sacrifice your future financial security to do so.