Who Pays For Home Renovations on Your Favorite HGTV and Other Shows — and What Do They Cost? 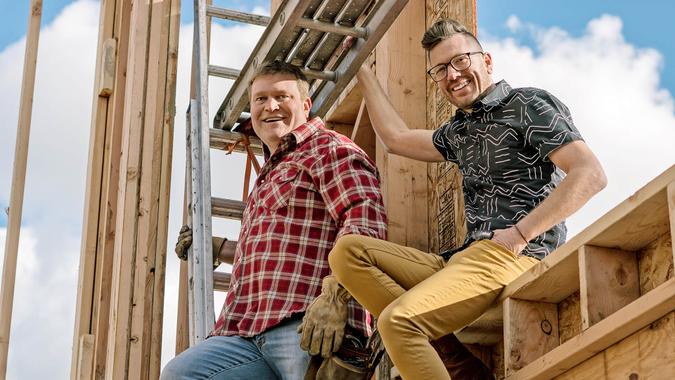 Like millions of Americans, you can’t get enough of the home renovations on reality TV. Watching properties receive amazing transformations in the span of an episode is nothing short of amazing — but it doesn’t come cheap.

No doubt, some homeowners do score a free onscreen renovation, but most have to foot the bill themselves. Specific rules vary by show, but some require notably hefty budgets for participation.

That’s right — you probably thought people opted to go on these shows in exchange for a free home revamp, but that isn’t typically the case. Sure, they’re likely scoring steep discounts, along with gaining the expertise of industry-leading remodeling experts, but they’re paying for it.

If you watch HGTV’s “Farmhouse Fixer,” you know Jonathan Knight — best known as a member of the New Kids on the Block — and his designer, Kristina Crestin, transform old farmhouses into dreamy residences. However, you might not realize the homeowners are required to have a renovation budget of at least $150,000.

Additionally, homeowners must be willing and able to move out of the property during the renovation process — a common requirement for these shows. Therefore, unless they’re able to stay with friends or family, they likely have to foot the bill for temporary housing, along with renovation expenses.

If you’re a fan of “Boise Boys” stars Clint Robertson and Luke Caldwell, you know their new HGTV series “Outgrown” has the best friends renovating homes to fit expanding families. However, this doesn’t come cheap, as homeowners are required to have a minimum budget of $75,000.

‘Home Again With the Fords’

Pittsburgh-based HGTV stars Leanne and Steve Fords’ new series, “Home Again With the Fords,” follows the sibling team as they update old homes for their clients as they move back to where they grew up — but it’s going to cost. Specifically, an $80,000 renovation budget is needed for consideration.

Now in its 13th season, HGTV’s “Love It or List It” — starring realtor David Visentin and designer Hilary Farr — follows homeowners as they update a property that is no longer working for them, then decide whether to stay put or sell it. The expert design and construction assistance is likely much-appreciated, but not cheap, as homeowners must have a budget of at least $75,000.

They’ve since moved on to other reality TV projects, but Nate Berkus and Jeremiah Brent starred on TLC’s “Nate & Jeremiah by Design” from 2017-2019. On the show, the celebrity designers helped couples renovate challenging living spaces that made their homes largely unpleasant to live in — for a price.

To be considered for the show, homeowners were required to have a budget of $40,000-$60,000. While this might seem pricey, it’s likely a bargain rate from each of their respective interior design firms, considering their A-list status.

“Fixer Upper” fans are likely beyond excited Chip and Joanna Gaines will be bringing back their beloved home renovation show on their new Magnolia Network in 2022. Casting is open to homeowners who live within 30 miles of Waco, Texas, but only those with a serious renovation budget need apply. All homeowners featured on the “Fixer Upper” reboot were required to have a renovation budget of at least $50,000. This means you can expect to see some pretty spectacular home updates on the new season.

A new show that has yet to air, High Noon Entertainment and an unnamed major television network are currently casting homeowners in the San Antonio, Texas, area who’ve lost that loving feeling for their house. The casting call seeks homeowners who initially loved a unique aspect of the property — i.e., a second-floor kitchen — but now realize it doesn’t work. If this sounds like your current situation, you could have your home transformed into a place that better meets your needs — if you have the cash to fund the project. All homeowners must have a renovation budget of at least $75,000 to be featured on the show.

A break from the standard rule, homeowners that appear on HGTV’s “Unsellable Houses” are not required to provide upfront funding for renovations on their property. Based in the Northern Seattle area, twin sisters Lyndsay Lamb and Leslie Davis are real estate agents who invest their own money to do light renovations on homes that have been sitting on the market for some time.

When the house is sold, the sisters recoup their initial investment and split any additional profits with the homeowner. While the homeowner ultimately pays for the renovations, it’s likely helpful to not have to come up with the cash before the improvements are made.

If you’re a homeowner who enjoys reality TV renovation shows, you’ve probably envisioned what it would be like to appear on one yourself. Whether you want to update a nonfunctional space or spruce your home up to sell, there’s almost definitely at least one show that will check all your boxes.

However, be prepared to invest a serious amount of cash in your renovation. Having your home featured on TV can be fun, but it’s certainly not cheap.

If you can swing the renovation budget, you will benefit from the expertise of industry-leading professionals with the ability to transform your space into your dream home. You’ll also get to enjoy your 15 minutes of fame, which will give you major bragging rights.