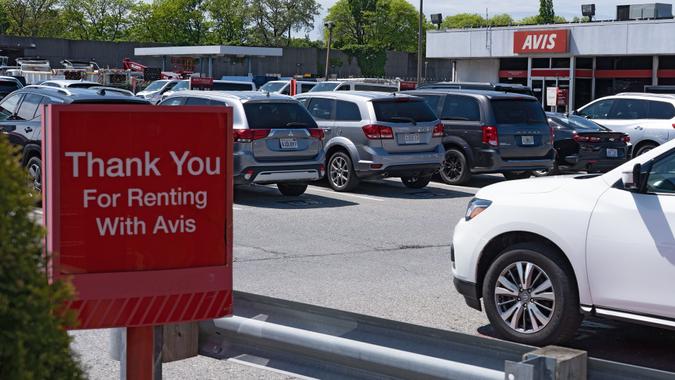 Avis went into meme-stock territory yesterday, following earnings that beat expectations as the company announcing it was adding more electric vehicles, following “the bold move by one of our competitors.”

The stock more than doubled yesterday to $357.17, after more than tripling at one point in New York, bringing total gains for the year to a whopping 858%, Bloomberg reported. The rapid jump in the stock price triggered at least 11 trading halts.

This afternoon, the stock was down 19%.

Tuesday’s surge came as Avis was mentioned alongside other retail-trader favorites on Reddit’s WallStreetBets thread and chatroom Stocktwits, according to Bloomberg, adding that mentions of the company’s ticker rivaled the likes of Tesla and GameStop across WallStreetBets Tuesday. MarketWatch reported that according to HypeEquity, mentions of the stock on social media grew by a mind-numbing 36,300% on Tuesday.

Related: GameStop NFT Marketplace Rumors Swirl — What It Means for the Future of the Meme Stock

For the third quarter, the company reported revenues almost double the prior year and 9% above the third quarter 2019, at $3 billion, which were driven by increased revenue per day and rental days as demand continued from the second quarter, according to an earnings release. In addition, Avis said on its earnings conference call that it will be adding more electric cars to its fleet over time, a piece of information it had withheld for “competitive reasons.”

Last week, Hertz announced it had purchased $100,000 Teslas, the largest EV fleet in North America and one of the largest in the world.

Brian Choi, executive vice president and CFO said on the call that “the bold move made by one of our competitors and that announcement is good for the overall rental car industry. It pushes pace and draws attention to what needs to be done to absorb electric vehicles at scale,” according to a transcript of the call. “So we are definitely moving forward on this front. But the reason you haven’t heard from us publicly on this is like because of competitive reasons, we’d like to execute on our strategy before announcing it,” Choi added.

Several analysts are urging caution, however.

See: How Memes Are Transforming the Stock Market
Find: 8 Best Cryptocurrencies To Invest In for 2021

Analyst Ryan Brinkman at J.P. Morgan downgraded the stock two notches to underweight, after being at overweight since August, saying the large run-up in the shares were likely triggered by a “short squeeze,” and now more than reflects “attractive” company-specific and industry fundamentals, MarketWatch reported.