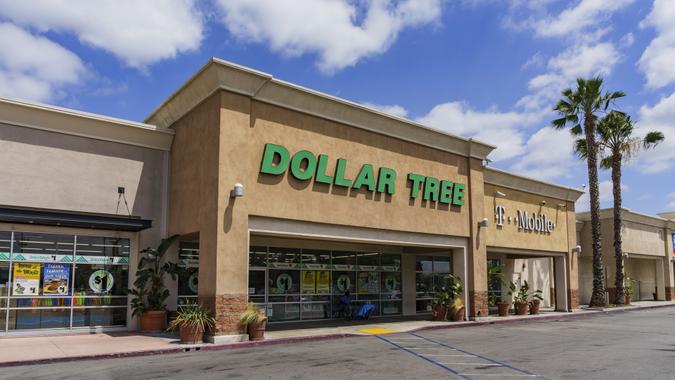 See: Here’s When You Should Skip Costco and Shop at the Dollar Store
Find: 10 Dollar Store Items That Aren’t Even Worth the Buck

“We are in the midst of a very challenging time for consumers, as many are living paycheck to paycheck,” Rick Dreiling, Dollar Tree executive chairman said in an investor call on May 26, according to a transcript of the call. “They’re facing the highest inflation since the early 1980s, record-high gas prices, the effects from the pandemic, geopolitical uncertainty and much more. In tough times, value retail can be part of the solution to help families stretch their dollars to meet their evolving needs.”

The company said that it is taking the necessary actions now to position itself for accelerated growth in what it views “as the most attractive sector in retail, especially in the current economic environment,” according to the earnings release.

Dollar Tree also said that the salty snack and the carbonated beverage products were the most popular and that they will add more “to really drive that consumable,” according to the investor call.

CFRA Research said it was maintaining its BUY opinion on Dollar Tree. It also is lifting its 12-month target by $9 to $175, “justified by stronger expected growth over the next few years as DLTR expands product offerings under the Dollar Tree banner following its decision to raise prices from $1 to $1.25 and as it begins to turn around the Family Dollar banner after several years of underperformance,” Arun Sundaram, CFRA senior equity research analyst wrote in a note sent to GOBankingRates.

As for Dollar General, CFO John Garratt said that despite the ongoing uncertainties arising from cost inflation and continued pressure in the supply chain, “we are confident in the business.” In turn, it increased its sales outlook for 2022, and now expects net sales growth of approximately 10% to 10.5%, according to a transcript of the May 26 investor call.

POLL: Do You Make a Weekly Meal Plan or Other Regular Household Budget?
Find: 10 Things You Should Always Buy at Walmart

“Overall, we’re pleased to see DG still performing well on the bottom line, despite tough comps, shifting consumer habits, and continued cost pressures and supply chain challenges,” CFRA’s Sundaram wrote in a separate note. “While DG’s value and convenience offering should attract more customers if consumers trade down and shop closer to home, a key risk is the overall financial health of the consumer, particularly lower-income households who we believe are disproportionately impacted by high rates of inflation.”