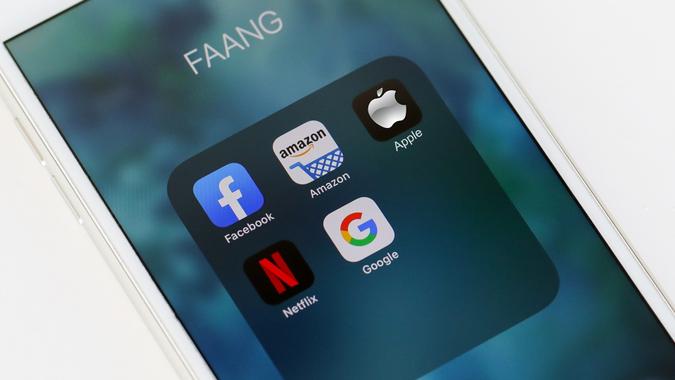 Facebook also didn’t fare well on the market Monday, in part due to a global outage of Facebook, Instagram and WhatsApp. The stock dropped 15% from its high in the first week of October.

Related: Zuckerberg Took $7 Billion Loss Within Hours Due to Facebook Outage — How Could Stock Be Affected?

Overall, the NYFANG+ index, which includes the FAANG stocks and ten other “highly liquid tech and internet stocks,” is down more than 9% in the past month, according to Bloomberg. Tesla is the only stock in the index holding tight in the black for the time period, although all except Amazon remain positive for the year.

Bloomberg reported that high treasury yields have hurt the outlooks for companies with high valuations. At press time, Amazon has a market cap of $1.65T. Investors predict that future earnings for companies like Amazon and Apple will be less valuable amid inflation pressures and high U.S. treasury bond yields.
“Their Achilles’ heel is higher rates,” Mike Mullaney, director of global market research at Boston Partners, told Bloomberg.

See: Warren Buffett Invests $1.1 Billion in Apple Stock: Should You Invest Too?
Find: Mark Cuban Reveals Why He Owns More Amazon and Netflix Than Any Other Stock

In spite of the threat of continued rising yields, Wall Street analysts still view the tech giants as a solid investment. Amazon is still rated as a “buy” from all 58 analysts who cover the stock, while 75% of analysts still rate Apple as a “buy,” according to Bloomberg.