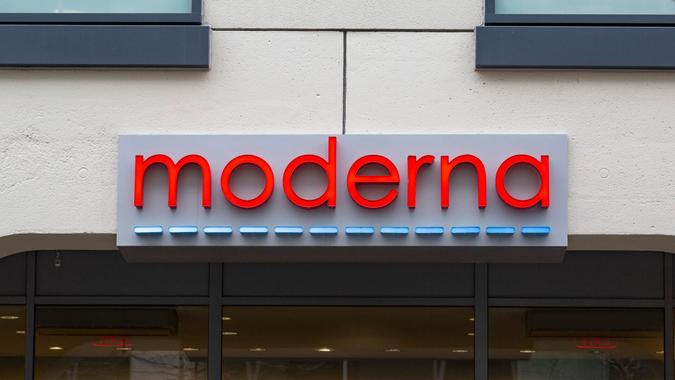 Moderna reported its first quarter earnings today, beating earnings per share estimates and reporting its first profit ever, thanks to its COVID-19 vaccine. The company also announced that its vaccine shows 96% efficacy in adolescents ages 12 to 17 years.

See: 5 Things You Might Not Know About Moderna
Find: Vaccine Roll-Outs Are Expensive – But Not Vaccinating the World Would Cost $9 Trillion

The company reported EPS of $2.84 according to the earnings release, compared to the consensus estimate of $2.39, according to Barron’s.

However, Moderna missed revenue estimates, reporting total revenue of $1.94 billion compared to the consensus estimate of $2.1 billion, according to Barron’s.  The shares were down 7% this morning.

Discover: Cash and 21 Other Everyday Things Wiped Out by COVID-19

The revenue for the quarter represents a huge jump from the $8 million reported for the same period in 2020, driven mostly by the company’s sale of its COVID-19 vaccine, which totaled $1.7 billion in the first quarter, according to the release.

“In the first quarter, the Moderna team delivered on its supply commitments to many governments and helped protect more than 100 million people. This accomplishment translated into our first profitable quarter in the company’s history, after 10 years of scientific innovation and several billion dollars invested to make our mRNA platform a reality,” CEO Stéphane Bancel said in the earnings release.

See: Pfizer Shares Are Up as They Submit Vaccine for Full FDA Approval – Is Now a Good Time to Buy?
Find: Is a Fourth Stimulus Check Ever Coming? Does Biden’s New Plan Change Anything? Here’s the (Harsh) Truth

“Based on these first quarter accomplishments and our current manufacturing scale-up trajectory, we were pleased to again increase our base plan for 2021 to 800 million doses. The Moderna team and our manufacturing partners are working hard to get as close to 1 billion doses in 2021 as we can,” he added.

On May 3, Piper Sandler analyst Edward Tenthoff reiterated a Buy rating and a price target of $234 on the stock, according to TipRanks.

Other analysts are “cautiously optimistic about the stock” with a Moderate Buy consensus rating, with an average analyst price target of $167.60, TipRanks adds.