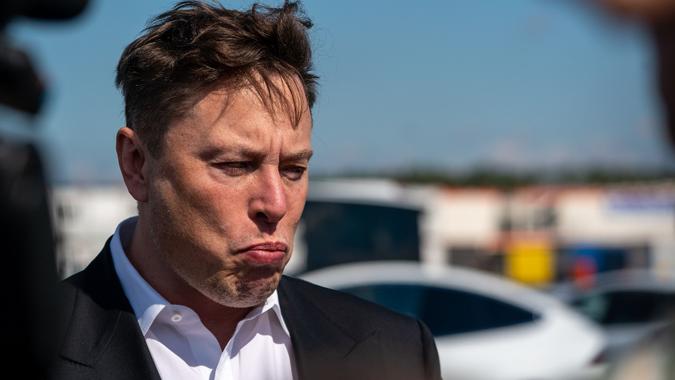 Elon Musk — still the richest man on the planet — has lost $50 billion in two days after Tesla shares tumbled for the second day in a row.

It’s the biggest two-day decline in the history of the Bloomberg Billionaires Index, and the biggest one-day fall after Jeff Bezos’s $36 billion plunge following his divorce from MacKenzie Scott in 2019, according to Bloomberg. He is still in front of Jeff Bezos, who, at the No. 2 spot, has a net worth of $206 billion.

Related: Nearly 40% of America’s Wealthiest Billionaires Give Relatively Nothing to Charity

Musk’s net worth had jumped by multiple billions earlier this month, following the announcement that Hertz had purchased 100,000 Teslas. Tesla’s stock also soared, which made the company hit the $1 trillion market cap.

Peter Cohan, a lecturer at Babson College and author of “Goliath Strikes Back,” told GOBankingRates that losing $50 billion in two days would be painful for “normal humans.”

“That certainly represents a significant chunk of his net worth, as well. I do not know exactly why the shares fell so much so fast nor whether the shares are likely to snap back quickly,” Cohan said. “But my guess is that it has something to do with the uncertainty about whether Musk will sell 10% of his holdings. But I seriously doubt that anything has happened this week to diminish the present value of Tesla’s future cash flows by that much.”

Read More: Musk Briefly Changes His Twitter Name to Lorde Edge, Sparks New Crypto
Find: Here’s How Much You’d Save on Gas With a Tesla and Other Electric Cars