Netflix Investors: What To Consider as Q1 Earnings Tank Stock 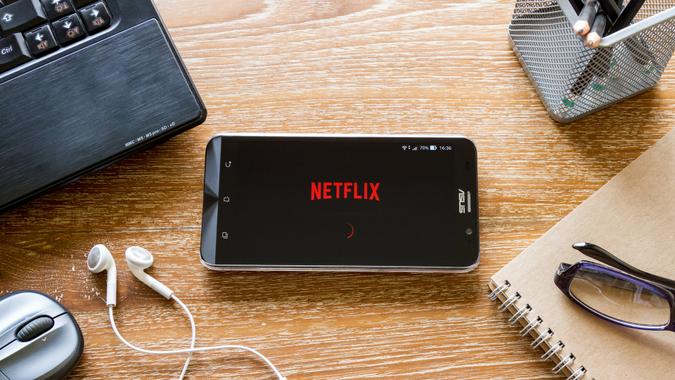 Netflix stock dropped 27% at market open on April 20 after a weak Q1 earnings report, as GOBankingRates reported earlier. The stock continued plummeting throughout the day, with a loss of nearly 35% by 1 p.m. EST.

For the first time in more than a decade, the streaming network showed a net loss of subscribers, with its base declining by 200,000 compared to the end of 2021. Netflix said during its earnings report that it expects a loss of another 2 million subscribers from April to June.

Chief analysts have shifted their rating for the stock from “buy” to “sell,” GOBankingRates reported. But is there a chance for the company to bounce back?

Rick Munarriz at The Motley Fool wrote concerning the matter: “It’s not the end of this movie,” referring to Netflix’s rapid drop in subscribers.

The streaming service is facing more competition than ever before — and not just from other streaming choices, but from other activities. As the world opens again and people begin to travel, visit friends, and go to the movies, they are spending their time and money elsewhere.

Cost is also a factor. To save money in the face of inflation, Forbes reported, 1.5 million people dropped their streaming subscriptions in the first quarter of 2022, up from 500,000 in Q4 2021.

Learn: 6 Alternative Investments to Consider for 2022

Netflix faces several challenges, including figuring out how to potentially further leverage customers who are sharing the service across multiple households, continuing to provide compelling original programming, and competing with more programming choices than ever before.

It’s important to remember that Netflix exec Reed Hastings is no stranger to innovation and disruption, however. He was an innovator in the DVD-by-mail industry, which was the predecessor to the Netflix streaming service. Today, streaming is a $82.43 billion industry, according to Statista, and Netflix was one of the first to do it.

There’s plenty more room for growth and innovation from the streaming service. Plans for a gaming service, a new pricing structure that monetizes shared accounts, and new advertising initiatives could save the day well before the end of the year.

The question stands: Will Netflix go the way of Blockbuster Video as other streaming services continue to ramp up their offerings and deliver more value? Or will the streaming service continue to innovate and begin to thrive once again by giving consumers more of what they want?

Past history shows Netflix has what it takes to deliver content that keeps people tuning in, even amidst intense competition at every turn.

The stock may be a “sell” right now, according to the experts, but it may also be one to watch for a turnaround.