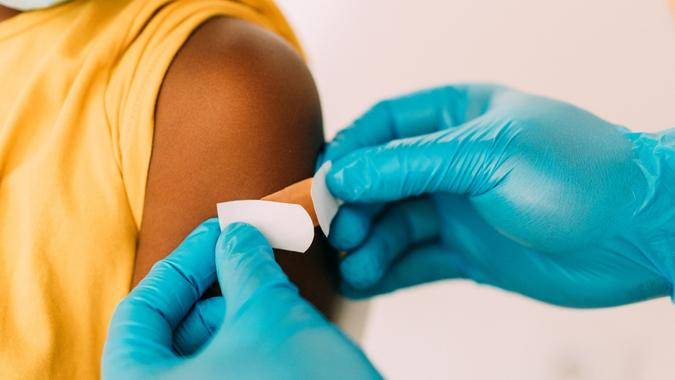 Pfizer stock moved higher in midday trading on May 17 after the U.S. Food and Drug Administration authorized a third booster shot of the pharmaceutical company’s COVID-19 vaccine for children ages 5 to 11.

Explore: 22 Side Gigs That Can Make You Richer Than a Full-Time Job
Find: 6 Alternative Investments To Consider for Diversification in 2022

The shot has been approved to be given at least five months after the two-dose primary series, CNBC reported. It was authorized because data showed that COVID protection weakens over time following the first two shots, according to Dr. Peter Marks, who heads up the FDA’s vaccine division. A third shot can help boost protection for children in the age group. The FDA also determined that the benefits of the third shot outweigh the risks.

Less than one-third (28%) of children ages 5 to 11 had received their primary series of two doses as of April, CNBC noted, citing data from the Centers for Disease Control and Prevention. In a statement on May 17, FDA Commissioner Dr. Robert Califf reiterated the need for parents to get their kids vaccinated to protect them against the virus.

Although children tend to have less severe cases of COVID than adults, a rising number of kids have been getting infected and hospitalized with the virus since the Omicron variant began over the winter. Overall cases are rising, as well, with the U.S. reporting more than 90,000 new infections a day on average as of May 15. That represented an increase of 30% from the previous week.

See: Could COVID Pill Prospects and Demand Boost Pfizer Stock Even More, or Is It Time to Sell?
Compare: How the COVID-19 Vaccine Has Affected Pfizer and 5 Other Notable Stocks

With the FDA’s decision on Pfizer’s vaccine, nearly every age group in the U.S. can now get at least three vaccine doses. The exception are children under age 5. The FDA’s advisory committee is slated to meet in June to review requests by Pfizer and Moderna to approve their vaccines for children under age 5.