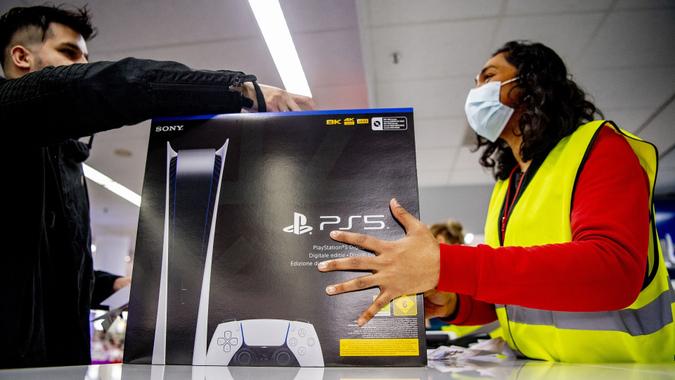 Digital Grinches in the form of bots are once again competing against humans to snag those ever-popular and elusive PlayStation 5 game consoles — just like they did last year over the holidays — which might be bad news for consumers who want to buy one the old-fashioned way. However, it’s holly jolly news for the stock prices of PlayStation partners Sony and Microsoft.

Compare: Stocks To Keep in Your Portfolio for the Next 30 Years
Top 10 Most Expensive Stocks: What Is the Highest Priced Stock Right Now?

Sony shares have been trading near 2021 highs this week as the electronics and entertainment conglomerate benefits from high sales of PlayStation 5. Microsoft’s stock price has been equally robust of late, establishing new highs in November and staying close to that range in December. Both stocks have been tracking closely to the S&P 500.

Xbox maker Microsoft and Sony formed a partnership a couple of years ago in which the latter company uses the former’s cloud technology to support its game and content-streaming services.

How much the Xbox and PS5 play into their strong stock performances is hard to say, considering that Sony and Microsoft both have plenty of other revenue sources. But both are highly profitable products — especially for Sony — and in such heavy demand that stores around the world sell out almost as soon as it hits the shelves.

Related: What Stores Are Open on Christmas Eve and Christmas Day?

Demand is so high, in fact, that bots and humans in Australia have been battling it out to score the PS5s that are available, ABC.net reported. The same thing happened last year in the United States.

This year’s battle is even more intense, though, because of a shortage in the number of PS5s being produced.

In November, Sony Group lowered its PlayStation 5 production outlook for this fiscal year because of component and logistics constraints, Bloomberg reported. Sony previously targeted manufacturing more than 16 million units for the year, but had to cut that number down to about 15 million.

See: Economist Predicts That These Will Be the Hottest Gifts This Year
Find: 4 Ways You’re Wasting Money Without Realizing It — And How To Stop

Despite the shortages, Sony had already sold more than 13 million PS5s as of late October, Forbes reported. That’s almost the number of PS4s that sold over the same time frame, even though the earlier model faced far fewer supply obstacles.