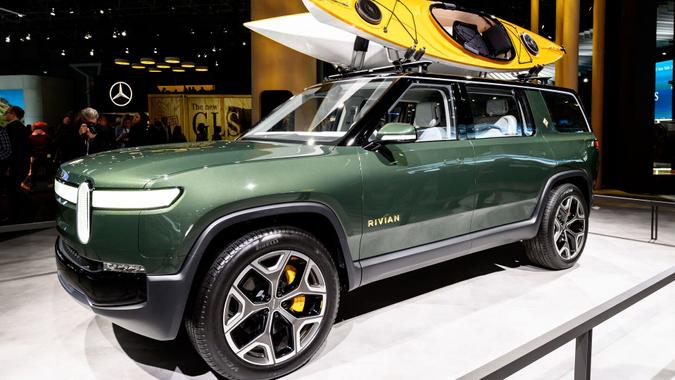 Electric vehicle company Rivian saw its stock crash after Amazon announced on Jan. 5 that it agreed to buy competitor Stellantis’ battery-electric vehicles, due in 2023.

Stellantis, the automaker formed after the merger of  Peugeot S.A. Groupe (PSA) and Fiat Chrysler Automobiles in January 2021, also announced that it will work with Amazon to provide software solutions for Stellantis’ new digital cabin platform, STLA SmartCockpit, starting in 2024, according to a statement.

Following the announcement, shares of Rivian tumbled 11% to $90.01, the biggest drop since Nov. 18, 2021, about a week after its blockbuster initial public offering, Bloomberg reports.

Rivian started its initial public offering on Wednesday, Nov. 10, 2021, in what has become 2021’s biggest IPO, as GOBankingRates previously reported. It also placed the company in the second spot, behind Tesla, as the largest U.S. carmaker.

Rivian shares were up 57% in their first two days on the Nasdaq. Rivian ended its first day as a public company valued at almost $88 billion, more than tripling its last private valuation. However, shortly after, its stock crashed following the announcement that it no longer planned to co-develop an EV with Ford.

CFRA Research initiated coverage on Rivian in December, with a “Hold” opinion.

“While we are impressed with demand for Rivian’s initial vehicle models, list of investors, and balance sheet/liquidity position, the stock’s valuation, forthcoming competition in the electric truck/SUV space, and potential quality-related concerns keep us on the sidelines,” Garrett Nelson, vice president at CFRA Research, wrote in a note sent to GOBankingRates.

Nelson added that he does not foresee profitability until mid-decade at the earliest and that while Rivian recently achieved “the impressive milestone of bringing the auto industry’s first electric pickup truck to market with initial deliveries of the R1T, the popular truck/SUV segment is about to become a lot more crowded with highly-anticipated offerings from Ford, GM, Tesla and others.”

In addition to these big-name EV brands, Rivian might soon have additional competition from others, including Sony Group, who announced on Jan. 5 that it would create a car unit and explore entering the electric-vehicle market, in another sign of how the electronics and car businesses are overlapping, according to The Wall Street Journal.

At the CES technology conference in Las Vegas, Sony showed off a prototype seven-seat electric sport-utility vehicle with all-wheel drive, which sent Sony shares closed up 3.7% in Tokyo after the news, The Wall Street Journal reports.

Also at the CES conference on Jan. 5, GM unveiled its Electric Silverado “which we believe is the start of a massive slate of electric vehicles coming from the Detroit stalwart over the next 12 to 18 months,” Wedbush Securities analyst Daniel Ives wrote in a note sent to GOBankingRates, adding that he views the event as “a renaissance of growth for GM with 2022 a pivotal year ahead as this green tidal wave plays out globally.”

“This is not your grandfather’s GM,” Ives wrote. “We believe the GM EV transformation story heading into 2022 is slowly starting to get recognized by the Street as we believe an EV-driven re-rating is now in process. With the Tesla trillion-dollar-plus valuation and growing EV appetite among investors for new innovative EV stories, the vertical integration capabilities of GM and conversion of its massive customer base to electric vehicles over the coming years represents a transformational opportunity for GM looking ahead.”

Ives adds that the green tidal wave and EV conversion opportunities will change the long-term growth trajectory at GM over the next decade with overall revenue set to double by 2030.

“We believe in a bull case scenario GM’s stock could hit $100 over the next 12 to 18 months as the EV vision begins to take shape,” he said.

And as GOBankingRates reported on Dec. 29, 2021, Tesla is set to have another stellar year, according to analysts.

In a note sent to GOBankingRates, Wedbush Securities’ Daniel Ives wrote that the stage is now set for EVs to take a significant step forward in driving customer adoption in this green tidal wave, with many winners as part of the biggest transformation to the auto industry since the 1950s.

“Musk & Co. have navigated the chip supply shortages better than any automaker globally over the last six months, which is why Tesla is in a clear position of strength heading into 2022 with an inflection point year ahead,” Ives wrote.

He added that there are three main catalysts for Tesla in 2022, that if successful, “will be a major driver of the stock moving higher with our current base case price target at $1,400 and bull case at $1,800.”