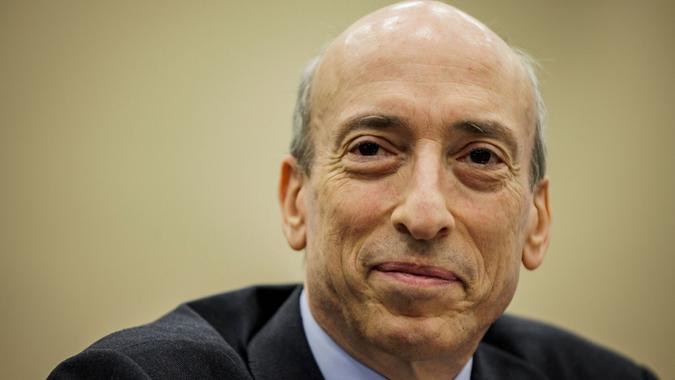 Securities and Exchange Commission (SEC) Chair Gary Gensler proposed new rules on June 8, saying that while retail investors have greater access to markets than any time in the past, “this technological transformation, though, also has led to challenges, including market segmentation, concentration and potential inefficiencies.”

Speaking at the Piper Sandler Global Exchange Conference “Market Structure and the Retail Investor,” Gensler said that right now, there isn’t a level playing field among different parts of the market: wholesalers, dark pools and lit exchanges, according to a transcript of his remarks.

“Further, the markets have become increasingly hidden from view. In 2009, off-exchange trading accounted for a quarter of U.S. equity volume. Last year, during the meme stock events, that share swelled to a peak of 47%. What’s more, 90-plus percent of retail marketable orders are routed to a small, concentrated group of wholesalers that pay for this retail market order flow,” he said in his remarks.

CNBC reports that Gensler’s announcement represents the biggest shake-up of U.S. equity market rules in a decade and will probably lead to formal proposals this fall.

The rules he proposed intend to “drive greater efficiencies in our equity markets, particularly for retail investors,” he said. They are around six areas and include the following changes.

Gensler said that the majority of retail marketable orders are flowing to wholesalers that pay for this order flow. In turn, this segmentation means that institutional investors, such as pension funds, don’t get to interact directly with that order flow. This segmentation — which isolates retail orders — may not benefit the retail public as much as orders being exposed to order-by-order competition, he said.

“I’ve asked staff to make recommendations for the Commission’s consideration around how to enhance order-by-order competition. This may be through open and transparent auctions or other means, unless investors get midpoint or better prices,” Gensler added.

Gensler addressed the minimum increments at which securities are priced — also called the tick size.

“In lit markets, investors see prices in one-penny increments. Wholesalers, though, can fill orders at sub-penny prices and without open competition,” he said. “More than half of the share volume in the first five months of this year was in stocks constrained by tick size. In contrast, sub-penny trading, including at a tenth of a penny, accounts for 37% of share volume executed off-exchange.”

In turn, he said that this raised questions about whether this structure is fair and best promotes competition.

His recommendations include “possibly harmonizing the tick size across different market centers — such that all trading occurs in the minimum increment; second, given the sheer volume of off-exchange sub-penny trading, as well as what is currently allowed in exchanges’ retail liquidity programs, possibly shrinking the minimum tick size to better align with off-exchange activity.”

The NBBO is a quote designed to aggregate information across different exchanges, which provides investors with important pre-trade transparency, Gensler said. However, he noted that one of the issues around it is that currently, the NBBO includes only what’s called round lots, which are quotes for 100 shares or more.

He said he asked his staff to consider several issues related to the NBBO.

“The question is, what is included or excluded from the NBBO?” he said. “Retail investors — the very investors who are more likely to buy or sell at odd lot prices — are unable to see these prices.”

This would enhance retail investors’ ability to compare execution quality, which is a measure of how frequently your order is filled at or better than the NBBO you see at the time it was entered by your broker, Gensler said. As of today, investors can’t compare execution across brokers, such as how much price improvement they provide to their clients.

“That’s because only “market centers,” such as dark pools, wholesalers, and exchanges, are required to provide these disclosures,” he said, adding that, this rule hasn’t been substantively updated since 2000.

Gensler said that now, the SEC doesn’t have rules for it, while both the Financial Industry Regulatory Authority (FINRA) and the Municipal Securities Rulemaking Board (MSRB) do.

“I think investors might benefit if the SEC considered proposing its own best execution rule. In addition, broker-dealers and investors might benefit from more detail around the procedural standards brokers must meet when handling and executing customer orders,” Gensler said, adding that he asked his staff to consider recommending that the SEC propose its own best execution rule — for equities and other securities.

Gensler addressed this issue to “best promote as much competition as possible for retail investors on an order-by-order basis.”

“The vast majority of retail marketable orders are flowing to wholesalers that pay for this order flow. What’s more, this segmentation means that institutional investors, such as pension funds, don’t get to interact directly with that order flow. This segmentation–which isolates retail orders–may not benefit the retail public as much as orders being exposed to order-by-order competition,” he said.

In turn, he said that asked his staff to make recommendations for the Commission’s consideration around how to enhance order-by-order competition.

“This may be through open and transparent auctions or other means, unless investors get midpoint or better prices,” he added.

The listed options exchanges have operated auctions for retail orders for many years. I’ve asked staff, in considering any recommendations for stock auctions, to draw upon lessons from the options market, focusing on assuring full competition among all market participants to provide the best prices for retail investors.

Gensler said that payment for order flow can raise real issues around conflicts of interest.

He reiterated what the SEC wrote in its GameStop report in October, saying that they may incentivize broker-dealers to use digital engagement practices, such as gamification, to increase customer trading.

See: How the SECURE Act 2.0 Can Affect Your Investment Portfolio and Strategy
Find: How Investing a Little Each Paycheck Goes a Long Way

Gensler said he asked his staff to make recommendations around how to mitigate conflicts with respect to payment for order flow and rebates.

“One thing I’ve asked them to consider is whether exchange fees — what somebody pays to access a quotation on an exchange — and rebates should be more transparent, so that investors can understand these amounts at the time of trade execution,” he said.