Tesla Makes More Money From Bitcoin Than It Does From Cars — What Does That Mean for Your Stock? 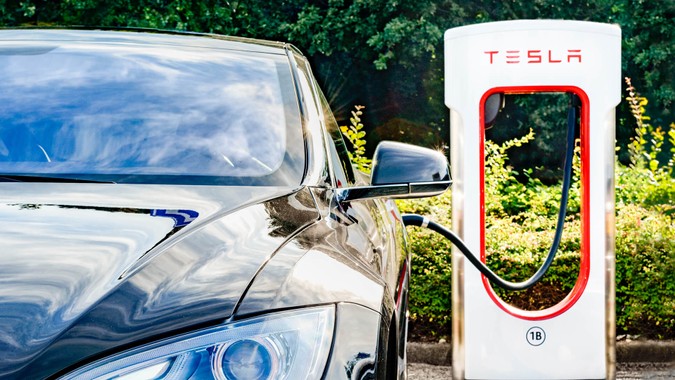 First-quarter results from Tesla show that it made more profits in the first three months of the year with Bitcoin than it did with its car business.

The company reached a quarterly record with net income at $438 million. However, Tesla did not earn its record profits from selling cars, according to its Q1 2021 earnings update. The company stated that it sold some of the $1.5 billion worth of its bitcoin holdings, contributing $101 million to its profit margin — that’s nearly 25% of its total profits.

The company disclosed its Bitcoin holdings in February, and according to its earnings update, then sold a good chunk of it. Reasons for the sale are unclear, but CBS points out that the price of Bitcoin has risen about 60% since the buy-in, which could have prompted Tesla to sell. Fears of a weak earnings report could also have led to the release of cryptocurrency in order to beef up profit margins.

Referencing a note that Ryan Brinkman, a Tesla analyst for JPMorgan, sent to clients on Tuesday, CBS reported that “if you  strip away the company’s gain on both bitcoin and regulatory credit, its core business of selling cars and solar panels actually lost $25 million in the quarter — significantly worse than he and other analysts had expected.”

See: Why Electric Cars Are Better for Your Wallet and the Planet
Find: It’s Electric — EV Stocks Could Pop in 2021

Tesla also added $518 million from selling regulatory emission credits to other car companies, which, as CBS points out, is almost pure profit for the company.

Credits are given to companies that produce electric vehicles as part of Zero Emissions Vehicle programs in California and 13 other states throughout the United States. If an automaker doesn’t have enough credits by the end of the year, it must buy more or risk being fined. Since Tesla only makes electric vehicles, it often ends the year with a surplus that allows it to sell the credits to companies that haven’t produced as many electric vehicles. This is essentially free money for Tesla, provided through government-sponsored vouchers.

Theoretically, Tesla could make just 10 cars the entire year, and from the profits on regulatory emission credits, achieve the same earnings it might get from producing 1,000 cars. In other words, Tesla can inflate its earnings by selling credits instead of cars — even before entering any kind of crypto market.

To put that in perspective, Ford sold over 500,000 cars in the first quarter of 2021 alone, more than double Tesla’s world-wide total, according to The Wall Street Journal. However, Tesla’s market value “still tops $700 billion, or more than five times the combined value of Ford and General Motors,” the Journal reports.

If Tesla extended its first-quarter results for the next three quarters, the stock would trade at about 200 times this year’s adjusted earnings.