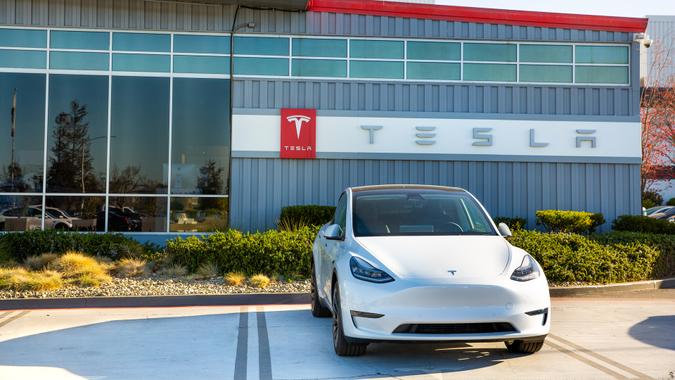 Tesla CEO Elon Musk has been very busy recently, most notably with his battle with Twitter following his bid to acquire the social media platform.

See: 6 Alternative Investments To Consider for Diversification in 2022
Find: 7 Financial Habits That Improve Your Daily Life

But the past few weeks also saw a string of additional major developments for Tesla, including a factory closing in Shanghai due to COVID-19 lockdowns, an opening of a Gigafactory in Austin and its “killer opening party,” the announcement of a stock split and a drawn-out battle with the Securities and Exchange Commission (SEC) over tweets.

In the midst of all these developments, and with Tesla earnings set to be released on April 20, how is the stock faring?

CNN reported that Tesla’s stock fell nearly 4% after Musk disclosed that he had made the bid to buy Twitter. Shares of Tesla are down 16.2% year-to-date.

For revenue, analysts generally have a pretty good idea of what to expect, thanks to the delivery numbers, according to Electrek. And as GOBankingRates previously reported, Tesla’s first quarter delivery numbers earlier this month were strong, albeit slightly below analysts’ expectations due to ongoing supply chain challenges and factory shutdowns, notably Shanghai’s COVID-19 lockdowns.

That’s why for earnings, all eyes will be on the company’s “brutal production issues in China with Giga Shanghai having a three-week shutdown due to the zero Covid policy in the region, Wedbush Securities analyst Dan Ives wrote in a note sent to GOBankingRates April 19.

“With Berlin and Austin key factories now on-line and producing Model Y’s in a quickly ramping pace, the main question for tomorrow is just how bad the China production issues are and what that means for deliveries in 2Q and the rest of the year,” he wrote.

Wedbush estimates that roughly 50,000 units are now reduced for the June quarter given the last three weeks of shutdown and depending on how aggressively Tesla can ramp back production, it could be impacted further over the next month.

Electrek reports that the Wall Street consensus for this quarter is $17.659 billion, and Estimize, the financial estimate crowdsourcing website, predicts a higher revenue of $17.866 billion.

An average between the two numbers would be roughly what Tesla generated last quarter (Q4 2021), but it would represent tremendous growth versus the same period last year (Q1 2021) when Tesla delivered roughly $10 billion in revenue, Electrek added.

Wedbush’s Ives added that the Street will be “laser-focused on an update for the 4680 battery cell production,” as well as supply chain “which continues to haunt Tesla as well as the rest of the auto/tech industry.”

However, in addition to persistent supply chain issues, Tesla is also facing tough competition from a slew of electric vehicle (EV) companies.

“Elon Musk’s offer to buy Twitter is the latest development in a weeks-long saga that is simply a distraction from the many challenges facing Tesla itself,” David Trainer, CEO of New Constructs, an investment research firm, told CNN.

See: Twitter Downgraded to ‘Sell’ as it Considers ‘Poison Pill’ Against Musk’s Hostile Takeover
Find: Musk, Bezos, Buffett and Gates Among Forbes’ Richest Billionaires — How Much Money Do They Have?

“Elon Musk should focus on Tesla and not waste time attempting to acquire and manage [Twitter],” Trainer added. “Tesla is facing significant competition in the electric vehicle space. The major automakers are catching up and are manufacturing innovative electric vehicles.”

Wedbush said it remains bullish on Tesla and maintains its Outperform rating, with a $1,400 price target.