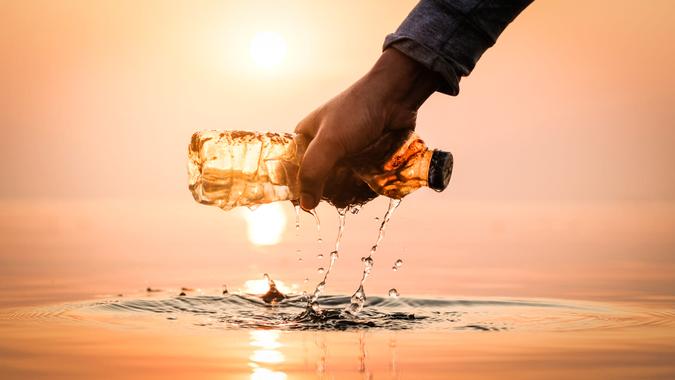 Companies across the globe often get a bad rap for being environmentally wasteful, and many of them deserve that reputation. However, there are a host of businesses that actually produce environmentally friendly products. And while eco-friendly companies used to be on the fringes of mainstream investment, they are now center stage.

Thanks to both a general trend toward renewable energy and the determination of the Biden administration, clean energy companies are finally gaining traction. Ancillary businesses, such as those that provide materials for such companies or operate in related fields such as recycling, are also benefiting.

As with all investments, consult with a financial advisor to ensure that the companies you buy match your personal risk profile and investment objectives. Here’s a look at some of the top environmentally friendly companies you can invest in now.

Brookfield Renewable Partners is one of the largest renewable-power investors worldwide, with generating capacity exceeding 20,000 megawatts, 8,000 of which come from hydro and the rest from wind, solar and energy transition. With over 5,950 power-generating facilities and $58 billion in assets under management, Brookfield saw record inflows of $34 billion in the third quarter of 2021, and it reiterated its goal of doubling the size of its business over the next five years.

Your home may not yet be powered by wind energy, but that change may be coming sooner than you think. Over the last two decades, wind energy generation has increased by a factor of 75, and that is likely to continue as costs continue to fall. NextEra Energy is poised to benefit, as it is the world’s largest generator of renewable energy from sources like wind and the sun. The Biden administration has made it a priority to double the amount of offshore wind energy produced by 2030. With these types of tailwinds, analysts say NextEra Energy could be a good investment choice, with 13 of 15 analysts reported by Yahoo Finance rating the stock a “buy” or “strong buy,” resulting in a solid “buy” consensus with an average price target of $93.70.

First Solar is another company that seems likely to benefit from both renewable energy trends across the globe and from the policy objectives of the Biden administration. First Solar, as the name suggests, is a solar power company. However, First Solar isn’t just an ancillary player in the space; rather, it’s got a hand in everything from the financing and development of solar energy to the actual construction and management of solar plants. This helps diversify the company’s exposure to various elements of the photovoltaic supply chain. For a solar company, First Solar has stable finances and is perfectly positioned to benefit from the Biden administration’s emphasis on — and private-sector investment in — renewable energy.

The stock is currently experiencing a correction from it’s highest price in over 10 years, $119.51 on Oct. 1, which could present a good opportunity to buy before First Solar resolves its current backlog of module shipments. Despite the recent slump, the stock is still up 21.20% for the last six months and 4.30% for the year.

Enphase Energy is a consumer-oriented solar energy company. Although not a household name, the company has installed over 36 million microinverters on over 1.5 million homes. The Enphase Energy system stands out because it uses individual microinverters on every single solar panel installed on a residential home, whereas most companies tie all of the panels into a single inverter. This means that each panel can operate individually, keeping the system going even if one of the panels fails. According to InvestorPlace, Emphase’s effective business model and the unique nature of its product give the company a significant advantage over competitors.

With the costs of solar energy falling and governmental support for clean energy rising, Enphase Energy could be in the right place at the right time. While acknowledging that Enphase is highly dependent on the U.S. market and is trading at high valuation ratios compared to the industry overall, Seeking Alpha calls it “an intriguing investment opportunity,” giving it an 87.4 ranking in its Factor-Based U.S. Large Cap Equity Strategy based on nine different metrics. On Dec. 9, Investor’s Business Daily reported the stock had reached a buy point. The stock closed at $216.35 that day.

Mowi ASA is a name that’s generally under the radar in the United States. The firm, which was formerly known as Marine Harvest ASA, is a Norwegian seafood company that primarily focuses on farm-raised salmon in a number of countries around the world. In fact, the company bills itself as the world’s leading seafood company, producing more Atlantic salmon than any other company. Though not involved in clean energy production, the company is still classified as environmentally friendly as its main product is sustainable seafood.

Mowi is perhaps not as exciting as some of the up-and-coming energy producers, but it’s less volatile than many. In its third-quarter 2021 earnings report, Mowi announced record-high quarterly revenue due in part to demand for salmon recovering from the effects of COVID-19 shutdowns. The global consumption of salmon was up over 30% compared to last year and reached a new high for the quarter, Ivan Vindheim, Mowi CEO, said in a statement. The company expects to see record-high farming volumes for the year, increasing its guidance and touting its strategy for expanding harvesting capacity.

Geothermal is not yet a big source of energy in the United States, but it’s a global winner and is gaining in popularity in the U.S. Ormat Technologies is one of the world’s leading geothermal energy companies, with operations in Central America, Southeast Asia, Africa and even the U.S. Yet the company’s global headquarters is based out of Reno, Nevada. While solar and wind energy seem to garner all of the headlines, geothermal is another important element in the clean energy revolution, and U.S.-based Ormat Technologies can give American investors a foothold in the space.

Ormat announced its third-quarter 2021 earnings earlier this month, reporting that shares had outpaced the S&P 500 with a roughly 3.8% gain over the previous month and an 8.1% gain for the quarter. Analylsts surveyed by Yahoo Finance rate the stock a “buy” with an average price target of $82.

Atlantica Sustainable Infrastructure owns and manages renewable energy and other power and water assets. The company’s portfolio includes 36 assets with an installed generation capacity of 2,022 megawatts, 71% of which is solar. Based in the U.K., the company owns and manages operations facilities globally, but its core geographies are North America, South America and Europe.

Kiplinger says AY is “among the Street’s most attractive green energy stocks.” CIBC is the latest brokerage to start covering shares of Atlantica, giving it a “neutral” rating and a target price of $41.

Sunrun is currently the largest solar rooftop business in the U.S., responsible for 20% of all such installations in the country. The company has been making some exciting moves, such as the acquisition of competitor Vivint Solar and government legislation providing grants and subsidies for green energy continue to grow. Sunrun is also leveraging the value of so-called “virtual power plants,” in which it sells excess energy stored in customer batteries to local utilities when requested.

In November, the company reported strong earnings and robust customer growth, and Sunrun predicts full-year 30% growth in installed solar energy capacity. Considering that Sunrun has a “buy” rating and an average consensus price target of $73.03, if you’re a believer in the future of solar, this company might be a good option for diversifying your clean energy portfolio.

Republic Services may not be the first company that pops into your head when you think of an “environmentally friendly” company. However, the services that Republic provides are an integral part of the clean energy pantheon. Republic Services is a waste management company, and recycling is a big part of the company’s mission. In fact, the company calls its employees “environmental stewards,” with the 36,000-strong force focused on increasing recycling and generating renewable energy. Recycling will likely play an important part in the growing clean energy movement going forward, and Republic Services is poised to ride that wave higher. Zacks rates it a “2-Buy” on a scale of 1 to 5, with 1 being “strong buy” and 5 being “strong sell,” noting that earnings have surpassed estimates in each of the last 20 quarters and the stock has shown strong returns over the past year.

Clearway Energy Group, with its public affiliate, Clearway Energy Inc., is one of the largest developers and operators of clean energy in the U.S., with over 5 gigawatts of wind, solar and energy storage in operation. The company’s capacity offsets the equivalent of about 8.8 million metric tons of carbon emissions for its customers. Operating in 25 states, one of Clearway’s claims to fame is its community solar farm initiative that offers households and smaller commercial customers energy credits by subscription to a shared solar farm built by Clearway, Kiplinger reported.