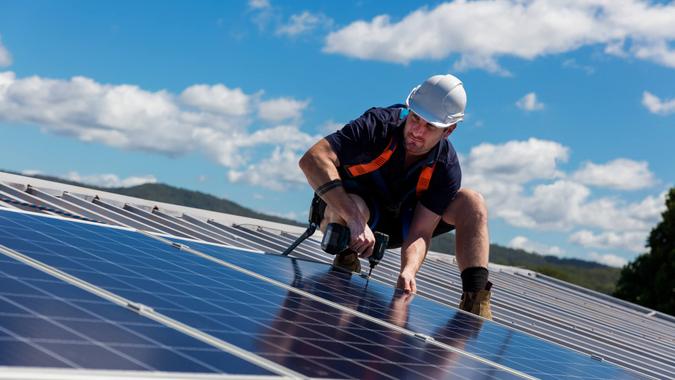 Companies across the globe often get a bad rap for being environmentally wasteful, and many of them deserve that reputation. However, there are a host of businesses that actually produce environmentally friendly products. And while eco-friendly companies used to be on the fringes of mainstream investment, they are now center stage.

Thanks both to a general trend toward renewable energy and the determination of the Biden administration, clean energy companies are finally gaining traction. Ancillary businesses, such as those that provide materials for such companies or who operate in related fields such as recycling, are also benefiting.

As with all investments, consult with a financial advisor to ensure that the companies you buy match your personal risk profile and investment objectives. Here’s a look at some of the top environmentally friendly companies you can invest in now.

Water is often taken for granted, but the truth is that for a good portion of the Earth, access to clean, fresh water is in short supply. And while America has been blessed with an abundance of cheap and safe water, many analysts feel that water is a commodity that could become in short supply in the future, even in America. Climate change, including rising drought levels, along with poor water infrastructure make cities in the U.S. from Los Angeles to Miami vulnerable to future water shortages. This makes a company like American Water Works a potential option for long-term investment. Founded in 1886, American Water Works is the country’s largest publicly traded water and wastewater utility company.

Your home may not yet be powered by wind energy, but that change may be coming sooner than you think. Over the last two decades, wind energy generation has increased by a factor of 75, and that is likely to continue as costs continue to fall. NextEra Energy is poised to benefit, as it is the world’s largest generator of renewable energy from sources like wind and the sun. The Biden administration has made it a priority to double the amount of offshore wind energy produced by 2030. With these types of tailwinds, NextEra Energy could be a good investment choice.

First Solar is another company that seems likely to benefit from both renewable energy trends across the globe and from the policy objectives of the Biden administration. First Solar, as the name suggests, is a solar power company. However, First Solar isn’t just an ancillary player in the space; rather, it’s got a hand in everything from the financing and development of solar energy to the actual construction and management of solar plants. This helps diversify the company’s exposure to various elements of the photovoltaic supply chain. For a solar company, First Solar has stable finances and is perfectly positioned to benefit from the Biden administration’s emphasis on renewable energy.

Enphase Energy is a consumer-oriented solar energy company. Although not a household name, the company has installed over 36 million microinverters on over 1.5 million homes. The Enphase Energy system stands out because it uses individual microinverters on every single solar panel installed on a residential home, whereas most companies tie all of the panels into a single inverter. This means that each panel can operate individually, keeping the system going even if one of the panels fails.

With the costs of solar energy falling and governmental support for clean energy rising, Enphase Energy could be in the right place at the right time. Many analysts agree, giving the company’s stock a consensus “buy” rating.

Mowi ASA is a name that’s generally under the radar in the United States. The firm, which was formerly known as Marine Harvest ASA, is a Norwegian seafood company that primarily focuses on farm-raised salmon in a number of countries around the world. In fact, the company bills itself as the world’s leading seafood company, producing more Atlantic salmon than any other company. Though not involved in clean energy production, the company is still classified as environmentally friendly as its main product is sustainable seafood.

Although perhaps not as exciting as some of the up-and-coming energy producers, Mowi is much less volatile than many. With the exception of the 2020 coronavirus sell-off, the company’s 10-year stock chart has shown a decade of consistent gains.

Geothermal is not yet a big source of energy in the United States, but it’s a global winner and is gaining in popularity in the U.S. Ormat Technologies is one of the world’s leading geothermal energy companies, with operations in Central America, Southeast Asia, Africa and even the U.S. Yet the company’s global headquarters is based out of Reno, Nevada. While solar and wind energy seem to garner all of the headlines, geothermal is another important element in the clean energy revolution, and U.S.-based Ormat Technologies can give American investors a foothold in the space.

TPI Composites is one of a number of companies that aren’t directly tied into producing green energy yet are intimately connected to it. TPI Composites is one of the world’s largest manufacturers of wind turbine blades that wind energy producers can’t survive without. Headquartered in Scottsdale, Arizona, the company has three additional domestic production facilities and eight international facilities, in such far-flung locales as China, Denmark, India, Mexico and Turkey.

For the full year 2020, the company hit $1.67 billion in sales. Although earnings per share dipped in the second quarter of 2021, analysts predict they’ll recover by Q1 2022 and increase in Q2, suggesting TPI Composites is poised to grow right along with the wind energy industry as a whole.

Sunrun is another solar energy company that will benefit from the same trends helping companies like First Solar. Sunrun is currently the largest solar rooftop business in the U.S., responsible for 20% of all such installations in the country. The company has been making some exciting moves, such as the acquisition of competitor Vivint Solar, and government legislation providing grants and subsidies for green energy continue to grow. Sunrun is also leveraging the value of so-called “virtual power plants,” in which it sells excess energy stored in customer batteries to local utilities when requested.

In August 2021, the company raised its full-year growth target to 30% year-over-year. If you’re a believer in the future of solar, Sunrun can be a good option when diversifying your clean energy portfolio.

Republic Services may not be the first company that pops into your head when you think of an “environmentally friendly” company. However, the services that Republic provides are an integral part of the clean energy pantheon. Republic Services is a waste management company, and recycling is a big part of the company’s mission. In fact, the company calls its employees “environmental stewards,” with the 36,000-strong force focused on increasing recycling and generating renewable energy. Recycling will likely play an important part in the growing clean energy movement going forward, and Republic Services is poised to ride that wave higher.

Avangrid is a sustainable energy company that is part of the Iberdrola Group. However, it is its own separate company and trades on the New York Stock Exchange under the symbol AGR. Although the company operates electric and natural gas utilities, it also has a renewable energy division primarily focused on wind, with a presence in U.S. states. With the recent approval of its acquisition of PNM Resources, Avangrid will grow to be the third-largest renewable energy company in the U.S., with operations now in 24 states.

That analyst ratings are all over the map right now is unsurprising given the company’s lackluster performance of late. However, some investors could see opportunity in the $2.3 billion financing deal Avangrid closed in September for Vineyard Wind, an 800-megawatt offshore wind project it’s developing in conjunction with Copenhagen Infrastructure Partners. This is one of the single largest investments in a renewable energy project in U.S. history. A subsequent restructuring of the deal gives Avangrid the option to take over operational control once the project reaches commercial operation.