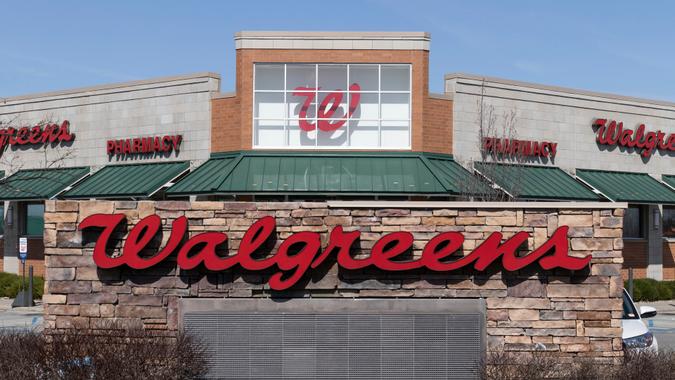 “Mandates are playing a role,” CEO Roz Brewer told CNBC. “There are many companies and organizations, cities and municipalities that are mandating and I think it’s forcing people to say ‘I need to go to work. So I have to get this vaccine.’ So it is creating an increase. And we’re seeing that in our stores.”

Analysts at CFRA Research issued a Hold rating, reflecting concerns of intensifying competition, particularly from Amazon, according to a note sent to GOBankingRates.

“The competitive landscape is a concern. In November 2020, Amazon launched Amazon Pharmacy, which we think can transform the way millions of people purchase prescription drugs given that there are more than 120M Amazon Prime members in the U.S.,” according to the note. “Prime members will have exclusive savings to certain prescription drugs through Amazon’s new prescription drug savings program. WBA has been benefiting from administering COVID-19 vaccines as the margins are attractive and the incremental foot traffic has benefited front-end sales.

“However, vaccines are expected to significantly slow in the upcoming quarter, which, combined with accelerated investments in digital and healthcare, makes the next few quarters quite challenging.”

POLL: Do You Plan To Attend a Holiday Gathering Despite Delta and Grocery Shortages?
Find: Small-Business Owners Describe Their Biggest Challenges With the Delta Surge

Walgreens shares were up 2.20% in pre-market trading and 3.7% this morning.