Bear Market Definition: What They Are and How To Invest During One 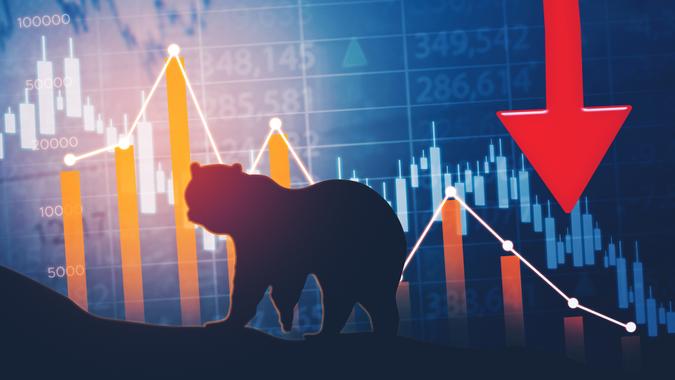 A bear market occurs when stocks are declining and sentiment is pessimistic.

Everybody knows that the stock market goes up and down. If you own stocks, you’d probably like to see them go up all the time. Unfortunately, that’s not the way that markets work. As both buyers and sellers are trying to profit from their positions, there will always be a tug of war between the market getting pushed higher and pulled lower. But what exactly is a bear market, and — more importantly — can you make money in one?

Here’s some information on bear markets that will help clarify the term and give you insights on how to react when a bear market arrives.

What Are Bull and Bear Markets?

Colloquially, “bull market” means stocks are going up and investors feel a sense of euphoria, while “bear market” means it seems like no one wants to own stocks and prices trend down. But Wall Street professionals generally have a more specific answer as to what bull and bear markets are.

What Is Considered a Bear Market?

Although there is no official, scientific definition of what a bear market is, market professionals generally announce a bear market once the broad market indexes, such as the S&P 500, decline 20% from recent highs.

What Is Considered a Bull Market?

A bull market occurs when stocks make a sustained gain of 20% off of previous lows. During a bull market, investors are optimistic and tend to aggressively buy up stocks, which drives prices higher — the mirror image of a bear market.

Is a Bear Market Good or Bad?

A 20% decline over a couple of months might be alarming to some investors, but bear markets are a normal part of a typical cycle.

When investors are optimistic about business and economic trends, they’ll buy stocks until they begin to think stocks are overvalued. At that point, many sell their positions. Consequently, the market goes down. Once it reaches a point where investors see value again, they start to buy, and the cycle repeats itself.

Whether a bear market is good or bad depends on how you are positioned. Is it good to buy in a bear market? If you’re a long-term investor, buying during a bear market is often a good thing. While it’s hard to endure the short-term pain of prices dropping by 20% or more, if you can buy in at lower prices, the market is likely to return to new highs, something it has done after every prior bear market.

Other investors who have sold stocks intending to buy them back later at lower prices also like bear markets because that’s when they can make money.

But bear markets can also be bad because investing by its very nature is an emotional experience.

Some investors just can’t stand the agony of watching their individual stock positions drop by 20%, 50% or even more, and they end up selling out right near the market bottom. Then, when markets reverse and start a new bull market, these investors are on the sidelines and miss out on the recovery.

No matter what kind of investor you are, you should be prepared to face a bear market at any time. But if you tend to get emotional about stock, put protections in place so that you don’t sell out at the wrong time.

Set up automated investing so that you’re always contributing to the market, even when your gut tells you not to, and don’t look at your portfolio too often, as you might make a poor emotional decision.

Bear markets are caused by a change in investor sentiment. This may have numerous causes. A weak business environment and poor earnings in one or more sectors of the economy are one potential factor.

Emotional and psychological factors also play a part, such as fear on the part of some investors that they haven’t timed the market correctly even though there’s no tangible evidence supporting that view.

What To Look For

Signs of a coming bear market are not always easy to predict, though there are a few things to look for. These include rallies that don’t last very long or sustained weakness in leading economic indicators. Exogenous factors, such as the COVID-19 pandemic and the Russian invasion of Ukraine, are also often triggers for a bear market.

Does a bear market mean recession? Sometimes, but not always. According to CenterPoint Securities, eight of the 11 bear markets since 1948 have been followed by recessions, with the time period between a market peak and the onset of a recession averaging seven to eight months.

What Is the Difference Between a Bear Market and a Correction?

How Often Do Corrections and Bear Markets Occur?

Corrections are normal occurrences and should be expected to happen about once every two years. According to data from Yardeni Research, there have been 39 S&P 500 corrections since 1950, and they have occurred every 1.9 years on average.

By contrast, bear markets occur about every 3.6 years. This means that while bear markets are not everyday occurrences, from a long-term perspective they do occur relatively frequently.

How Long Do Corrections and Bear Markets Last?

However, long-term averages can be misleading, and bear markets have been trending shorter and shorter. The last three bear markets, in 2011, 2018 and 2020, averaged just 4-5 months in duration.

One of the worst mistakes an investor can make is to believe that stocks only go up. They don’t. Stocks will go down, and bear markets do happen. The best thing to do is to educate yourself on the basics of investing and be prepared for the downs as well as the ups.

Bear markets are unsettling even to the most veteran of investors. When the stock market as a whole is down over 20% and individual names have dropped by 50% or more, it can be easy to believe that everything is going to zero and that the whole financial system will collapse.

But as the old Wall Street axiom says, the time to buy is “when there is blood in the streets,” meaning when things look as bleak as possible. If you find yourself in the throes of a bear market, stick to your long-term investment plan, scoop up some bargains and try to keep your emotions on the sideline.

It may take months or even years, but eventually the market is likely to recover and go on to new highs, rewarding those who were patient.