A Look Back at Mortgage Rates Since the Year 2000 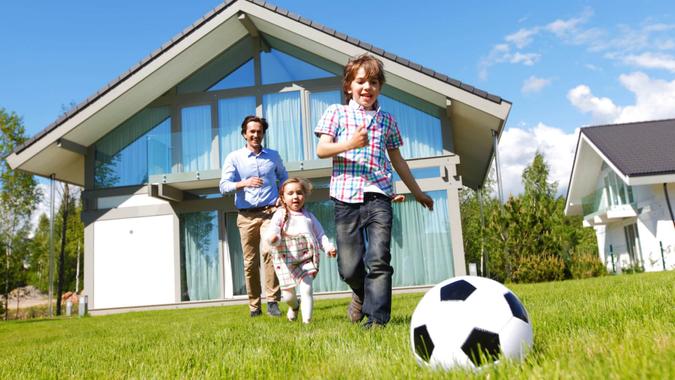 Until you are thinking about buying a home, terms like “mortgage rates” probably don’t mean much to you. For homebuyers, however, they translate into dollars — lots of dollars that affect how much money you pay toward the purchase of your home every month.

A mortgage rate refers to how much interest is applied to the mortgage loan you take out by your lender. The number has varied significantly over the years, from a high of 8.64% in 2000 to a low of 2.65% in early 2021, and now, back up to over 5% again just recently.

Mortgage rates fluctuate due to a number of factors, according to Investopedia, but mostly inflation, the general health of the economy, the Federal Reserve’s policy, the bond market and the state of the housing market.

Inflation is a particularly big driver of mortgage rates, as lenders are constantly trying to settle on a rate that overrides inflation losses so they can still make a profit. The Federal Reserve also adjusts its federal funds rate according to economic indicators and inflation often leads the Fed to raise interest rates, as it has recently done, which impacts mortgage rates.

Of course, the state of the housing market itself also plays a role in mortgage rates. When there are less homes for sale (or being built), less home purchasing means less demand, which drives interest rates down.

So how have mortgage rates fluctuated over the past 22 years? Let’s take a look back.

After a brief refinancing boom in the late 1990s, mortgage rates rebounded somewhat steeply in the 2000s, according to Value Penguin, hitting a high of 8.64% before slowly making their way down toward an average of 6.6% by 2006.

Perhaps one of the most momentous years for mortgage rates (and the economy), however, was 2008, when rates hung out between 5.8% and 6.5%, depending upon the type of loan, according to the Federal Housing Finance Agency. While these rates were decent, sharply declining home values and predatory loan practices by private lenders led to a housing market crash that left many people in dire financial straights, owing more money on their homes than they were worth and sending the economy into a recession.

According to the Center for American Progress (CAP), most of the mortgage lending taking place prior to the crash was homeowners refinancing, led to believe they were getting lower interest rates that would allow them to take out equity. The reality, though, was sketchy lenders were actually selling “complex and risky products that quickly became unaffordable when economic conditions changed.” The bubble could not hold.

After the housing bubble burst, the Federal Reserve jumped in to try and relieve the economic disaster by cutting interest rates again, and the mortgage rate remained at an average of 5.09% for some time.

As we rolled into the 2010s, still riding the wave of recession, mortgage rates remained low, around 4.69%, according to Rocket Mortgage. They continued to drop, and then hit 3.79% by 2012. However, in 2013, the rate rose again to 3.98% after a market panic brought on by the Federal Reserve saying it would not buy the usual number of bonds.

Rates dropped further for the remainder of 2019, stabilizing at around 3.7% at the beginning of 2020 — and then came the COVID-19 pandemic. Reacting to the economic impact of the pandemic’s lockdowns, the Federal Reserve dropped the federal funds rate again, which impacted interest rates. By the end of 2020, a 30-year fixed rate mortgage could be had for a shockingly low 2.68%.

Though the pandemic had a dampening effect on many people’s finances, the housing market itself surprisingly did not take a hit. In fact, it seemed hotter than ever, as people in a position to buy rushed to capitalize on these super low mortgage rates, according to Vox. This, in combination with a low housing inventory, led to an explosion in home sales.

From October of 2021 onward, however, rates have made a steady progression upward. And, as many economic experts warned they would, the Federal Reserve raised its federal funds rate a half a percent. This, along with inflation and supply and demand in the housing market, has impacted the mortgage rate, bringing it to an average 5.25% in May 2022.

Going forward, the question on everyone’s minds is — will the mortgage interest rate hold here or go up? Now that the super low rates of 2020-2021 are gone, and home prices continue to rise, the demand for houses is likely to drop.