Parent Plus Loans: How Much Debt Are Parents in and Can It Be Forgiven? 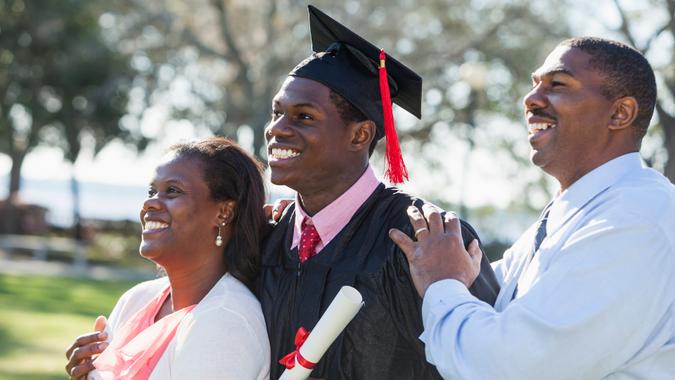 The parents of dependent undergraduates can use a Direct PLUS Loan, commonly referred to as a Parent PLUS loan, to borrow up to the cost of the student’s attendance each year with no limit on the amount borrowed. While a loan without a cap may seem appealing, there’s potential for parents to get into serious debt.

See: As Navient Leaves 6 Million Student Loans Stranded, What Should Borrowers Do Now?
Find: Your Employer Can Pay $5,250 Annually Towards Your Student Loans Tax-Free Until 2025

According to a July 2021 survey conducted by The Harris Poll on behalf of NerdWallet, 1 in 3 parents with federal parent PLUS loans say they wouldn’t have taken out the loan if they could do it all over again.

Parent PLUS loans are much easier to acquire, with no income requirements and relaxed credit standards; however, they’re more expensive than other federal student loans since they carry higher interest rates and origination fees, NerdWallet explains.

According to 2021 federal College Scorecard data, the median parent PLUS loan debt is $29,945, NerdWallet added, and one-third of parents aren’t ready for loans to restart, which have been paused since the onset of the pandemic.

New information on repayments published by the government just this year shows what a big problem Parent Plus loans have become. While the majority of parents have been able to make payments, 10% of loan takers are only able to afford the interest payments, leaving them with ballooning debt.

Collectively, parents owe $103.6 billion in parent PLUS loans, The Wall Street Journal reports. Many parents are unable to retire because of the loans, which, oftentimes, they expected their children to pay off.

Plus loans repayment issues are a two-fold problem. The inability to pay the loans not only hurts the borrower’s credit but if they default, the debt lands on taxpayers to bear, according to the Wall Street Journal.

The NerdWallet survey also found that 28% of Parent PLUS borrowers are counting on widespread debt forgiveness, but there’s no guarantee among experts.

See: Behind on Your Retirement Savings? 6 Money Moves Millennials Should Make To Catch Up
Find: Money Advice You Shouldn’t Pass on to Your Gen Z Kids

The WSJ added that these loans aren’t eligible for federal student plans which forgive debts after 20 to 25 years. One way around this would be to ask the government to consolidate the old loans into new ones to create a loan that can be repaid based on income. Parent PLUS loans can also be discharged upon death or permanent disability of the borrower.