Although the government does not plan on disclosing full information about its recent stress test on 19 of the country’s largest banks until tomorrow, Bloomberg has as obtained an estimate of capital requirements at 10 banks. In April, the largest financial institutions where chosen and subject to a series of tests that would estimate their capitalization needs and ability to survive under worsening economic conditions such as rising unemployment and further drops in asset values. Here are the results below.


So far, the government has made billions in loans to ailing financial institutions under various government programs. Here are the amounts borrowed per major bank so far. 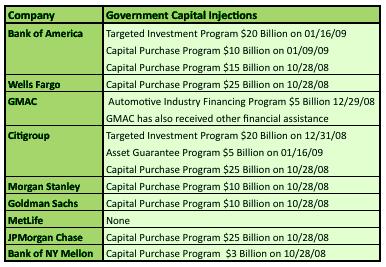 Despite seemingly bad economic news from every media outlet, there seem to be glimmers of hope. Housing sales have started picking up as mortgage rates remained low, and unemployment data to be released Friday is expected to be the lowest in 6 months, further signaling that the recession may indeed be winding down. Central bank chief Ben Bernanke has recently stated that he believes the economy will pull out of the recession later this year, despite ongoing job losses and slow recovery predictions.

There has been much public scrutiny over the government’s stress test, mainly stemming from its lack of transparency and terms. Billionaire investor Warren Buffett has publicly stated that the tests cannot properly value asset classes, and as a result it will not reveal much in terms of banks surviving in worsening scenarios. Still others are asserting that the tests are a waste of time, designed to give false assurances while the important details are kept under wraps.

How do you feel about the results of the stress test?

Can US Government Default?