Although many millennials don’t let FOMO — the “fear of missing out” — get in the way of their finances, their lifestyles are quite expensive. Not only do millennials have to pay for everyday necessities — rent, groceries, utilities, etc. — but there are also those discretionary expenses that they love that can add up quickly: daily Starbucks coffees, new iPhones, Netflix subscriptions, Coachella tickets and more.

To really illustrate the “time is money” concept, GOBankingRates.com compiled a list of 28 “essential” expenses that many millennials confront and used a simple formula to figure out how many work hours are needed to pay for each expense. The result: a detailed breakdown of how many hours working millennials need to put in to afford some of their favorite, and not-so-favorite, expenses.

Necessities or “needs” are supposed to consume about 50 percent of your income, so it’s not too surprising that monthly rent requires the most work hours.

Considering the median weekly earnings for millennials is $619.50 — which means the median hourly earnings is around $15.49 — and the average monthly rent for a one-bedroom apartment in the U.S. is approximately $1,060, according to recent Numbeo data, it takes about 68 work hours to cover rent.

But, where millennials live impacts how much they pay for rent. In some cases it makes more sense to own rather than rent a home, as there are only a few states where renting is the more affordable option, found a recent GOBankingRates study.

But not everyone is an Apple user, so here’s a breakdown of how many work hours it takes to pay for similar phones:

The third most expensive “essential” is the cost of your average lifestyle bike. Depending on where you live, investing in a bike could pay off more in one city versus another. Cities like Portland, Washington, DC, and San Francisco have many bike commuters and accommodations for cyclists, reports TIME.

So instead of driving or Uber-ing around the city, you could save money on transportation by riding your bike — even if it does cost you more than 29 work hours.

You will need to work a little over three work days to afford a general admission ticket to Coachella. If Coachella isn’t your scene, there are plenty of other festivals you might want to start budgehttps://www.gobankingrates.com/saving-money/budgeting/easy-to-use-budget-templates/ting for today:

If you thought the cost of a Coachella ticket wasn’t too bad, you might have forgotten to factor in transportation expenses. The average round-trip domestic flight will cost you about 60 percent of the median weekly earnings for millennials ages 16 to 34.

But millennials can save time and money on airfare by changing how they search for tickets.

“Whenever you search for a flight, instead of looking directly at the airline websites, use a metasearch engine like Skyscanner.com or Google Flights,” said Barry Choi of MoneyWeHave.com. “You’ll usually find the lowest prices without spending hours of your time.”

6. One Month of Groceries

The monthly recommended minimum amount of money for food per person is $334.09, according to Numbeo. Based on that figure, millennials will need to work approximately 21.57 hours to afford this expense. To save money on groceries, consider shopping at a different store.

MarketWatch compared the cost of 14 grocery items between major grocery stores and found Whole Foods to be the most expensive and Trader Joe’s the cheapest.

Millennials will have to work roughly two and half days to cover the cost of the average monthly health insurance premium, which was $314 for a silver plan in 2015, according to data from the National Conference of State Legislatures. However, you can dramatically reduce the number of work hours needed to cover health insurance costs by moving to a different state.

A recent GOBankingRates.com study found that New Mexico and Utah are the best states for health insurance. Both states have low-cost silver plans that cost only around $200 a month, according to the study.

Assuming that you took out $25,000 in student loans with a 6.8 percent interest rate and a 10-year repayment plan, the monthly cost of a student loan is around $280 — the equivalent of around 18 work hours.

Student loans are a critical issue for millennials. College graduates aged 35 and under spend roughly one-fifth of their salaries on student loan payments, according to a 2016 survey by Citizens Bank.

Unless you don’t want running water or electricity, you can’t really avoid paying for basic utilities. At $146.38 — the estimated monthly utilities expense, according to Numbeo data — utilities will cost you a little more than a full day of work to pay off.

If you can’t find accommodations on a friend’s a couch, the average nightly hotel rate will cost you just over a day’s worth of work to afford. Americans paid an average of $137 per night for hotels in the U.S. during the first half of 2014, according to Hotel.com’s Hotel Price Index.

Millennials can potentially save money on hotel rooms if they wait long enough to book them.

“The average night, hotels are about two-thirds full, meaning hotels are willing to sell rooms at cheaper prices just to fill them,” said Mark Mazza, co-founder and CEO of PromoCodeWatch.com. “You generally will have to wait until the day of your stay to take advantage of such prices.”

Meanwhile, Beyonce tickets ($125.18) will cost you around eight work hours to afford, and Britney Spears tickets ($140.24) will require about nine work hours.

There are many ways to score cheap concert tickets, but one convenient tactic is to use a website like SeatGeek. This site “color codes the best ticket deals in green,” said Mazza. “Plus, you can trade concert tickets over the SeatGeek app and set email alerts for when ticket prices drop for a show you want to see.”

How many hours you need to work to afford tickets to a Taylor Swift concert, the typical monthly internet bill and a new pair of jeans.

There’s no better time than summer to visit Disneyland. A regular, one-day ticket costs $105, equal to nearly seven work hours. Here are some of the other best theme parks and how much they will cost you in hours.

Whether you’re wearing them for exercise or everyday footwear, a pair of Nike running shoes costs nearly $75, according to Numbeo data. That’s the equivalent of a half day’s work.

If you want to spend fewer work hours on running shoes, Mazza suggested checking out brands that are comparable in quality — but cheaper than Nike.

A Costco membership is a great way to save on life’s essentials, especially since the $60 annual fee will cost you fewer than four work hours.

“A Costco membership is definitely a good investment for millennials,” said Mazza. “Costco is great for bulk buying. You can buy bulk foods for up to 89 percent less than packaged foods. And Costco’s gas prices are cheaper per gallon than competitors and gas stations.”

Internet access has become nearly as important as running water to everyday life. Fortunately, the cost of internet service per month is around $51, according to Numbeo data.

Here’s a glimpse of how much internet might cost you by carrier:

Coming up right behind internet service is the estimated cost of a pair of jeans, which is $42.28, according to Numbeo data. It will cost you only 2.73 work hours to cover buying a new pair of jeans.

Costing under three work hours, a Gold’s Gym membership is one of the cheaper essentials on the list. Just make sure to factor in the $59 processing fee when you sign up because it will cost you an additional 3.8 work hours to cover the expense.

To save money on fitness, consider ditching your gym membership entirely. There are tons of fitness apps and at-home exercises you can do for free — or at least for cheap.

Get Closer to the Millennial Lifestyle: 38 Best Bank Promotions

18. Dinner at a Restaurant

If you don’t go out to dinner that often, 2.54 work hours to cover a restaurant bill isn’t too bad. However, if you eat at restaurants once a week, your monthly expense shoots up to 10.16 work hours.

Location is another important factor to consider when eating out. People in New York City spend, on average, 3.1 work hours ($48.15) on dinner, according to Zagat’s The State of American Dining in 2015 report. Meanwhile, dinner in Austin, Texas, will cost only about 1.7 work hours ($25.81).

Assuming your gas tank holds 14 gallons, it will cost you a little more than two work hours to fill up your tank. But, of course, different cities have different gas prices. And, the length of your work commute will also determine how much you pay for gas.

Here’s a breakdown of the number of work hours to pay for a commute in a few major U.S. cities, using data from a 2015 Citi survey on commuting trends and assuming you work 20 days out of the month:

If you can’t afford tickets for a show, Apple has you covered. You can buy Beyonce’s album “Lemonade” for only 1.16 work hours, a fraction of attending a Beyonce concert.

The average Uber trip might cost you less than one work hour to afford, but it’s an expense that varies depending on which city you’re hitching a ride in. For example, an UberX trip cost $29.34 in New York City, according to a 2015 SherpaShare report on rideshare trends. That’s the equivalent of nearly two work hours.

The most common price for a bottle of wine to drink at home is around $10 to $15, according to a 2015 American Wine Consumer Preference Survey. Assuming that most millennials spend about $10 on a bottle of wine, that’s only 0.65 work hours.

At a cost of 0.64 working hours, a Netflix subscription is pretty cheap — especially compared to cable. The mean reported monthly spending on pay-TV service is $99.10, a 2015 Leichtman Research Group, Inc., report found. That’s basically the same as paying 6.4 work hours.

Here’s how many working hours it costs for similar subscriptions:

The monthly membership fee for Spotify Premium costs the same amount as a Netflix subscription. But if you’re looking for more options, here’s how many work hours it takes to pay for similar music subscriptions:

Movie ticket prices have increased over the years to $8.42, reports the Hollywood Reporter. But, the average ticket still only costs half an hour’s work.

A chicken burrito from Chipotle costs $6.50, according to FastFoodMenuPrices.com. So, you will only have to work half an hour to satisfy your burrito craving.

Your morning Starbucks coffee will cost you the first 15 minutes of work to afford, according to FastFoodMenuPrices.com. If Starbucks is part of your daily routine, it’ll cost 1.35 work hours a week and 5.4 work hours a month to buy a Venti Latte every day.

Rounding out the list is the American fast food staple: the Big Mac. Again, it costs a little over 15 minutes of work to afford and, compared to coffee, most likely isn’t a daily expense that will add up to a lot of money.

Figure Out How Many Hours It Costs to Afford Your Expenses

The formula to figure out how many work hours millennials must put in for these “essentials” is relatively simple. GOBankingRates determined the median hourly earnings for people ages 16 to 34 to be $15.49. To get the number of work hours, take the cost of one of the “essentials” and divide it by $15.49. For example, the price of a movie ticket is $8.42. Divided by $15.49, that equals 0.54 work hours, or just over a half an hour of work.

You can use this simple formula. Take how much you earn per hour and divide it by the price of whatever you want to buy.

Keep Reading: How Much Money You Need to Live Comfortably in the 50 Biggest Cities 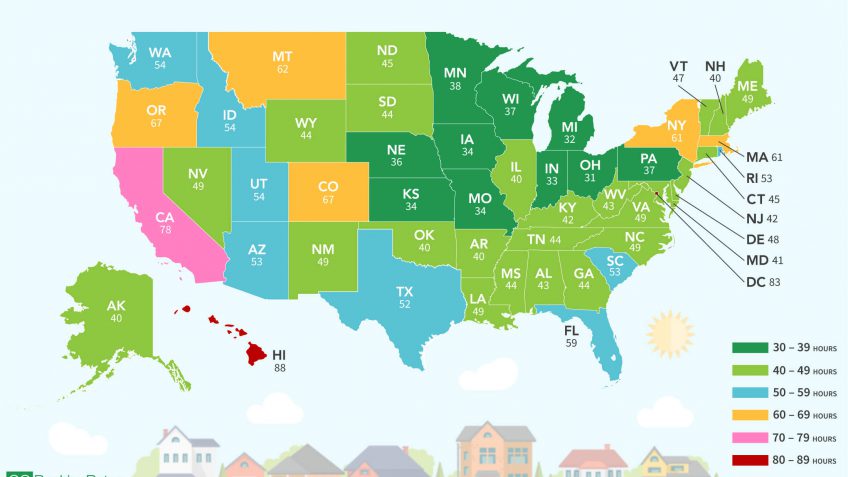