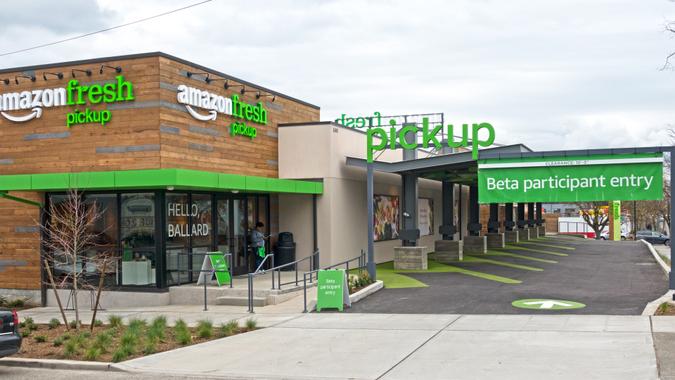 One of the stores will be located in the Logan Circle neighborhood and the other will be in the northern Virginia town of Franconia, close to Amazon’s second headquarters, dubbed HQ2, according to CNBC.

CNBC reports that two other grocery stores are planned for the Philadelphia suburb of Warrington, Pa., and for Chevy Chase, Md.

The company opened its first Amazon Fresh grocery store in August 2020 in Los Angeles’ Woodland Hills neighborhood and has since rapidly expanded in California and Illinois.

Amazon said that the stores make grocery shopping more convenient, including with “the Amazon Dash Cart, which enables customers to skip the checkout line, and new Alexa features to help customers manage their shopping lists and better navigate our aisles,” according to a statement.

It is also offering free same-day delivery for Prime members.

With its Fresh stores, Amazon appears to be going after “a squarely middle income customer who may shop at both discounters and conventional grocers already,” Morgan Stanley analysts said in a note on Tuesday, according to CNBC.

“As consumers increasingly demand same day grocery fulfillment (both for delivery and pickup at store), Fresh stores could therefore fill a previously missing hole in AMZN’s grocery fulfillment process while also building AMZN’s brand in food retail,” the analysts wrote, according to CNBC.

See: How Amazon Changed Our Shopping Habits — For Better and Worse
Find: The Worst Things to Buy on Amazon

The store, located in Ealing, London, employs “Just Walk Out” technology, which “automatically detects when products are taken from or returned to the shelves and keeps track of them in a virtual basket. When you’re done shopping, you can just leave the store. Later, we’ll email you a receipt and charge your Amazon account. No queues, no checkout. (No, seriously.),” Amazon said on the grocery’s website.