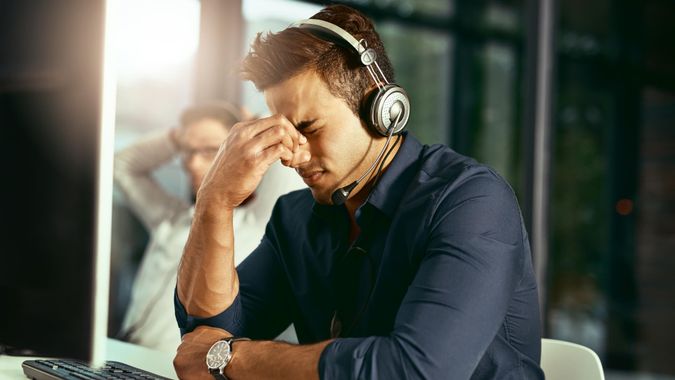 The COVID-19 pandemic turned the world upside-down and forced Americans to navigate a new normal from home. The  dependence on online tools and call centers also created an increased opportunity for financial fraud against consumers and financial institutions. The new data comes from a report by voice biometrics company Pindrop.

As millions of Americans found themselves unemployed after businesses closed down, call centers were inundated with calls from people looking for help from unemployment offices, banks and lenders. According to data collected by Pindrop, the first weeks of the pandemic saw a sharp spike in both the volume and duration of phone calls. Between March and April 2020, the max call wait time increased to nearly 55 minutes. By the end of 2020, call durations increased by 14%, and callers had to wait 11 minutes longer to talk to a person.

Instead of using social engineering scams to try and access consumer accounts, scammers targeted overwhelmed unemployment offices. Data from the Federal Trade Commission shows $36 billion in unemployment benefits — 10% of the CARES Act funding dedicated to helping those out of work — were lost to fraud.

Scammers were able to collect unemployment benefits by leveraging leaked data sold on the dark web and working the system. Using purchased personal data and applying for benefits, these individuals hijacked benefits from pre-paid debit cards or through bank transfers that were ultimately sent overseas.

See: As We Move Toward a Cashless Society, These Are the Risks You Need to Know About
Find: 4 People Whose Identities Were Stolen — and How They Got Through It

There were two ways the fraud took place. Individuals who were already collecting benefits or applying for credit cards could use a combination of real and fake data to claim they were victims of identity fraud. In turn, they would either collect double the benefits or have credit card balances written off after securing cash advances or buying items for resale.

The other method involved off-shore “phishing camps” that sought to steal or purchase personally identifying information and use it to open accounts. One such case the U.S. Secret Service investigated in May 2020 involved the Washington State Employment Security Department, where a “well-organized Nigerian fraud ring” attempted to use stolen identities to rob the system for “hundreds of millions of dollars,” according to the Pindrop report.

Paycheck Protection Program loans were also targeted by scammers as a source of quick cash. According to analysis by Pindrop, around 0.20% of all PPP loan applications processed at smaller fintech institutions at the end of April 2020 were fraudulent. In these cases, the scammers were attempting to use made-up companies to get loans processed and funded. The report notes that institutions were the main victims, having been flooded with applications with few safeguards to determine which ones were fake.

A study conducted by Forrester Consulting for Pindrop showed that although fewer fraudsters are calling contact centers, fraud attacks and fraud losses have increased. In fact, 57% of fraud detection and prevention leaders said fraud was still on the rise through October 2020. But these banks, fintech companies and insurers say they are much more aware of it and are doing more to try to prevent it from affecting customers.

Of those polled, 36% say they strongly agree they have a good understanding of how fraud starts and is perpetrated through call centers, while 34% say they strongly believe they can discover and stop fraud in real time with a high degree of confidence and accuracy.

Still, there are steps consumers can take to safeguard their personal information and protect themselves and their money. In addition to using all the security tools available from your bank or credit union, it’s important to get educated on the most common coronavirus-related scams in order to avoid them at all costs.