America has had its share of company towns over the years, with some of America’s biggest cities becoming ubiquitous with their biggest employers — Detroit as Motor City, to Pittsburgh as Steel City and Cincinnati once going by the unfortunate nickname of “Porkopolis.” Even today, the biggest employer in a city can play an important role in the lives of its inhabitants.

And, depending on which city you call home, you might be near a very different main employer, according to a new study by GOBankingRates. The largest employers in America’s biggest cities are a varied bunch, but some companies are even the home to the biggest payroll in multiple burgs.

Here’s a look at which companies are the biggest employers in each of the 50 largest cities in America:

As more people opt to do their investing and banking online, one area where the need for physical locations is declining steadily is finance. But you wouldn’t know that by looking at this study.

Of the organizations that are the largest employers in more than one of America’s largest 50 cities, two are banks. JPMorgan Chase & Co. is the top employer in both New York and Chicago, and Wells Fargo has the most employees in San Francisco, Charlotte, N.C., and St. Louis.

The same is also true of retail stores, with Kroger employing the most people in two Ohio cities — Columbus and Cincinnati. And Walmart, the biggest private employer in America, has the largest payroll for Houston, Phoenix and Tulsa, Okla.

Healthcare giant Kaiser Permanente is the largest employer in more than one city in its home state of California. 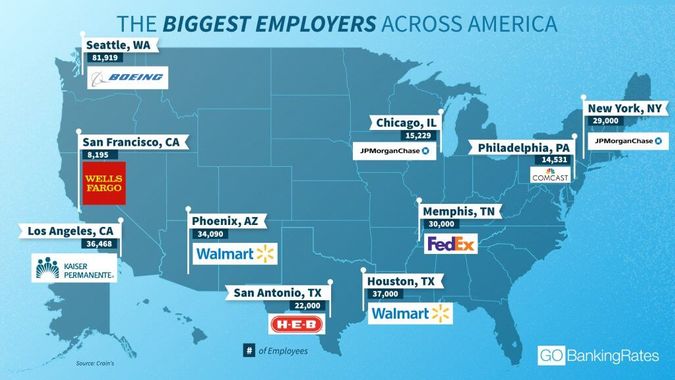 Traditional Industries on the Decline?

It’s also notable that some of the famed connections between a specific city and an industry don’t appear to be linked in the same way anymore.

For example, the top employer in Detroit isn’t Ford, General Motors or Chrysler — it’s Dan Gilbert’s Rock Ventures. Pittsburgh’s largest employer isn’t a steel firm, but rather, the bank PNC. Milwaukee’s top employer isn’t a brewer — or even a dairy. It’s GE Healthcare. And sunny Los Angeles, home to Hollywood and the supposed center of the entertainment industry, is one of the three cities where Kaiser Permanente is putting the most people to work.

So although those better-known industries might have helped define those cities in the public eye, it might be time for people to start updating their perceptions.

Click to keep reading about the best and worst cities to score your dream job.

Methodology: GOBankingRates analyzed financial data for 50 of America’s largest cities in order to determine the largest private-sector, for-profit employer in each. Data was compiled from various sources, including individual city comprehensive annual financial reports (CAFR) and reports conducted by Crain’s. 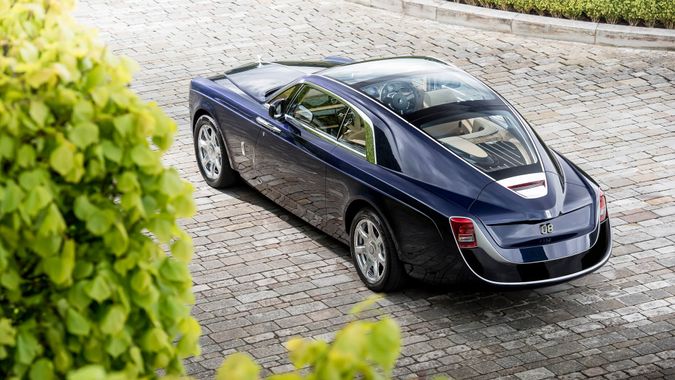 This Rolls-Royce Is the Most Expensive New Car Ever Sold

Guess how many millions one couple paid for this luxe car.

> Money > Business > Need a Job? Here Are the Biggest Employers Across America