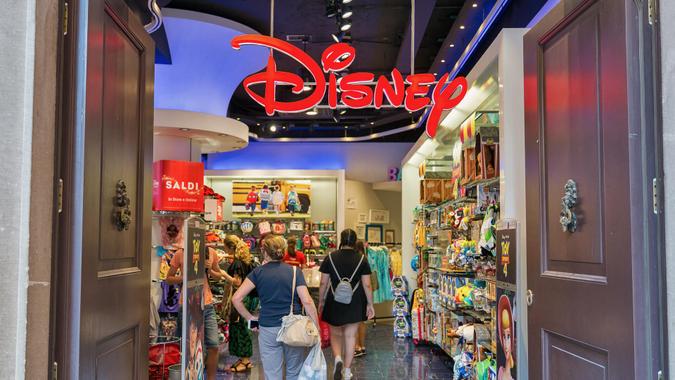 For those who can’t get to Walt Disney World or Disneyland Resorts as often as they’d like, Disney Store chains in malls worldwide often serve as a temporary fix to experience Disney magic. With “cast members” who greet shoppers at the door with a friendly smile and a wide array of Disney merchandise, from t-shirts to toys, walking into a Disney store can be like stepping through a portal from a suburban mall to a tiny slice of the “happiest place on Earth.”

See: How Your Favorite Brands Reinvented Themselves and Made Big Money
Find: What’s Next for Disney and Other Big Companies in 2021

The Walt Disney Company announced Wednesday that it is shifting its focus to online shopping and will close at least 60 Disney Store locations in North America, representing about 30% of its total stores in the region, The New York Times reported Wednesday. Disney Stores have been part of shopping malls for 33 years, opening in 1987. At their peak, more than 1,000 locations existed worldwide, according to the Times article.

In 2017, Disney attempted to revitalize retail locations with live video feeds from the theme parks and even more of an experiential shopping vibe, with “magic mirrors,” castles and Disney movies playing on big screens within the stores. The chain also shifted the merchandise selection to appeal to young adults with new lines of apparel, relying less on curated selections of children’s toys and stuffed animals, according to CNBC.

Stephanie Young, president of Disney Consumer Products, Games and Publishing said in the Times that ShopDisney, Disney’s online store, will expand over 2021. The company will seek to integrate the online shopping experience with Disney’s theme park apps and the brand’s social media presence.

Meanwhile, The Motley Fool reported yesterday that Disney+, the brand’s streaming service, is set to overtake Netflix as the undisputed streaming leader. On a mid-February episode of “Motley Fool Live,” “The Wrap” host Jason Hall and Fool.com contributor Danny Vena discussed the rapid growth of Disney+ and analyst predictions about the service surpassing Netflix in subscribers.

Disney stock has risen 65% over the past few years, Vena observed during the podcast. “Disney has exceeded the wildest expectations. The company had amassed 10 million subscribers by the end of the first day that the service was available. In their Q1 earnings release, Disney said that Disney+ was just short of 95 million subscribers as of Jan. 2,” he said during the show.

Disney had originally aimed to reach between 60 million and 90 million subscribers by 2024. With such incredible success right out of the gate, it’s safe to say that Disney execs have been doing more than just wishing on a star to make dreams come true.