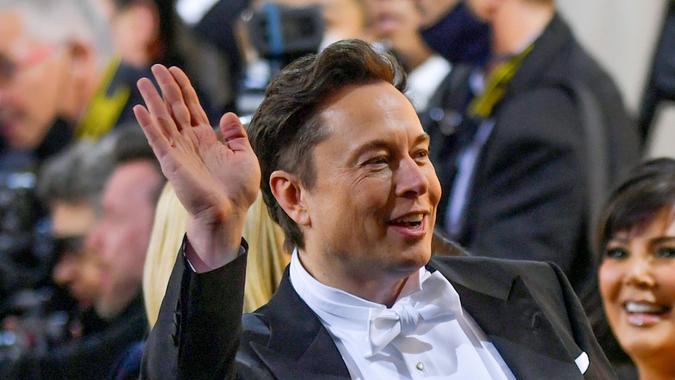 Elon Musk held his first meeting with Twitter staff on June 16, a virtual one via his cell phone. During the session with Twitter’s 8,000 employees, Musk fielded questions and addressed a wide range of topics, including the possibility of layoffs and Twitter potentially integrating crypto, as well as his thoughts on alien life and freedom of speech, according to multiple reports.

Be Aware: 9 Bills You Should Never Put on Autopay
More: 10 Best Countries To Live on Just a Social Security Check

The New York Times reports that Musk seemed set on closing the $44 billion deal, which has been “on hold.” Musk had pumped the brakes on the deal by claiming that spam and bots accounted for at least 20% of users on the social media platform — a figure much higher than the “less than 5%” Twitter had disclosed in filings, as GOBankingRates previously reported.

He then claimed — via a letter from his attorneys — that the lack of said information represented a “material breach” of his agreement to buy Twitter. With all that still seemingly unresolved, he held a meeting anyway.

Regarding layoffs, Musk told the Twitter staff, “Right now, the costs exceed the revenue. So that’s not a great situation to be in. And so there would have to be some rationalization of headcount and expenses to have revenue be greater than cost. Otherwise, Twitter is simply not viable or can’t grow. So, yeah, I think it would just be dependent on you know, like I said, anyone who’s obviously a significant contributor should have nothing to worry about. I do not take actions which are disruptive to the health of the company. So, you know, yeah,” according to a transcript of the meeting from ReCode.

As for crypto, Musk said “money is fundamentally digital at this point,” adding that “it would make sense to integrate payments into Twitter so that it’s easy to send money back and forth,” according to the transcript.

“So I think people should be allowed to say pretty outrageous things that are within the bounds of the law, but then that doesn’t get amplified, it doesn’t get, you know, a ton of reach. And I think an important goal for Twitter, really, is to try to include as much of the country, as much of the world, as possible,” he added, according to both the transcript and a leaked video from Project Veritas posted on Twitter. Musk tweeted back, saying “exactly.”

Following the meeting, Wedbush Securities analyst Dan Ives tweeted that it was the “wrong call at the wrong time in our opinion. Lots of answers Musk could not provide given fluid nature of deal. Clear contrast in Musk culture vs Twitter DNA evident on call it appears. Remains an overhang in a white knuckle market-TSLA.”

Ives also told GOBankingRates that in terms of the deal itself, “We believe $54.20/$44 billion is essentially out the window at this point and is reflected in Twitter’s current stock price/deal spread as the Street views a clear renegotiation of the current deal likely in the cards on the fake account issue.”

He added that there is still a chance that Musk tries to walk away from the deal and pay the $1 billion breakup fee, although this will likely end up in a long, brutal court battle.