How Much Does It Cost To Own a KFC Franchise? 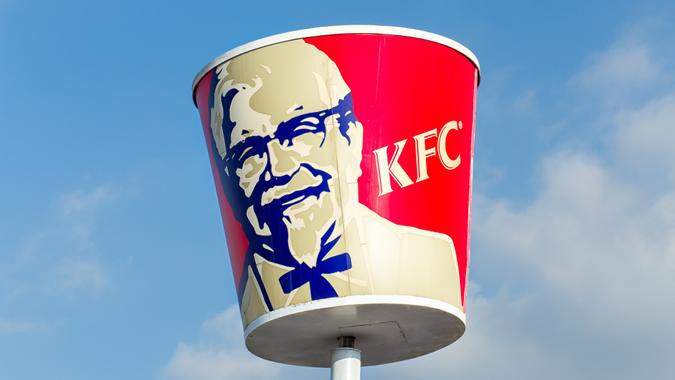 Harland Sanders developed the recipe for his famous chicken, complete with 11 herbs and spices, in his mother’s kitchen. It was so delicious that he opened a restaurant in Corbin, Ky., to serve his chicken — and other people wanted to sell it, too.

By 1952, Colonel Sanders, as he would become known, helped friends open their own chicken restaurants of what the first franchise holder would dub “Kentucky Fried Chicken.”

FYI: In Less Than a Decade, You Won’t Be Able To Afford a Home in These Cities
See: The Best Cities To Retire on $2,000 a Month

With more than 25,000 restaurants in over 145 countries and territories, KFC is the world’s most popular chicken chain. Nearly 4,000 of those locations are in the United States. Of all the restaurants, 99% are run by franchise owners, according to the company.

KFC is a division of Yum! Brands, which has 40,000 locations around the world bearing the banners of brands that also include Pizza Hut and Taco Bell.

The KFC brand is growing. In fact, around the world, a new KFC franchise opens every six hours, according to the company website. Read on to learn how you could be one of the next franchisees in a company that has $4.6 billion in U.S. sales annually.

Buying your own KFC franchise takes more than chicken feed. According to company documents, the cost to open a restaurant that is newly built ranges from $1.44 million to $3.16 million. If you choose to remodel and reopen an existing restaurant, that would cost slightly less: between $1 million and $2.4 million.

Should you open a non-traditional restaurant, the price drops significantly, from $253,600 to just over $1 million. The final cost depends on the location or venue and size of your KFC.

All of the costs you’ll pay are detailed in the KFC Franchise Disclosure Document (FDD), which the Federal Trade Commission requires to be given to prospective franchise purchasers. As you advance in the application process, you’ll want to review the document thoroughly.

Educated Franchisee, an online resource for prospective franchisees, has a copy of the 2022 KFC FDD available for download on its website. In the approximately 400-page document, what you’ll pay to run a KFC franchise is detailed.

The costs start with a $45,000 initial franchise fee, plus additional charges for training, development, royalties and more. Then, there is the big-ticket item of the actual building fee, plus the cost of inventory, equipment, signs and décor.

Applying for a Franchise

Not everyone who wants to buy a KFC franchise will pass the rigorous qualification and application process.

To start, a prospective franchisee must have a net worth of at least $1.5 million and $750,000 in liquid assets, which the company defines as cash or an asset that be converted to cash in a span of 10 business days. That’s just the minimum; requirements could be much higher depending on the transaction, the company says on its website.

Your application will go through an assessment, which can take as long as 12 weeks. It includes interviews and background checks. If you advance to the next round, you’ll undergo a more thorough review, which includes a deeper look at the financial transaction, your experience and whether you have a “sound personal reputation.” In addition, your business background will be reviewed, including any experience in operating a hospitality business or a restaurant.

If you’re considering opening a KFC franchise, you’ll undoubtedly study the FDD and ask a lot of questions to get the data you’ll need to determine your profit potential.

KFC outlines average revenues and expenses in its FDDs but cautions that these are just averages. In fact, the swing in the amount a restaurant can bring in is wide.

In the 2021 fiscal year, the 39 company-owned restaurants in the United States took in an average of $1.4 million. The average cost of products accounted for about 30% of net sales, with labor costs totaling about 32%, according to the FDD.

Still, the average net sales at the company-owned stores ranged from $830,562 to about $2.4 million.

Buying a KFC franchise requires a tedious review process and a deep financial commitment, but running a busy franchise — complete with all the “finger lickin’ good” chicken you can eat — might be your dream job.