Advertiser Disclosure
The e-commerce giant Amazon has come a long way from its inception as an online bookseller to a retail giant that is disrupting everything from the assumed supremacy of big-box stores like Walmart to grocery store and delivery service models. Amazon boasts a large range of services and deals, the largest of which is the members-only Prime Day event. The company reported that its 2019 Prime Day was the largest shopping event in Amazon’s history, with estimated sales of $7.16 billion. In 2019, Prime Day extended to a full 48 hours, continuing the trend of increased hours since the original 24-hour Prime Day in 2015.

From its humble origins, Amazon has made its CEO, Jeff Bezos, a multibillionaire thanks to the success of the company’s stock. Of course, with success comes high expectations, and even Amazon is not immune to the opinion of analysts and stock market investors. After the company disappointed investors with its third-quarter earnings release in October 2019, the stock initially shed over 9% of its value, resulting in a paper loss of over $7 billion on that day. But Amazon stock is still the third-largest in terms of market cap, behind only Apple and Microsoft.

Here’s a closer look at what the company is currently worth and why that might — or might not — matter to investors:

Here’s what this guide will cover:

One of the most reliable gauges for what a company is worth is its market capitalization, otherwise known as market cap. The market cap is the value of all of the company’s stock combined, which mirrors what investors are willing to pay for a piece of the pie. Amazon’s market cap has ranged between $646.5 billion and $1.007 trillion over a 52-week period.

Also See: Here’s How Much Amazon Has Invested In Acquiring Other Companies

Although market cap gives you a clear sense of the company’s market value, it’s based entirely on market sentiment — essentially reflecting the ever-changing opinions of investors, which changes from hour to hour. The GOBankingRates Evaluation, on the other hand, calculates a company’s net worth based solely on measurable figures like assets and revenue. It’s a more conservative valuation, taking into account only full-year profits and revenue from the last three years, and the company’s assets and debts.

Based solely on Amazon’s revenue and profits from the last three years, Amazon is worth just $160.47 billion.

Learn: How To Use Quarterly Earnings From Amazon, Facebook to Your Advantage

The fact that this number is much lower than Amazon’s market cap reflects the hard decision any investor has to make before deciding to purchase stock from companies like Amazon. The company is growing quickly and the large market cap indicates that investors are willing to pay more for Amazon’s potential future, despite its current revenue and profits not quite warranting the price.

For more conservative investors, Amazon’s current price will likely seem outrageous, considering the stock has fallen more than 10% from its all-time high. However, more forward-looking investors who are ready to take a chance on Amazon’s continued growth might be willing to pay a premium. Only time will tell which decision is best, but the stock made a nearly 500% gain — from $299.07 a share to $1,777.08 — from Oct. 30, 2014, to Oct. 29, 2019, meaning the less conservative approach would have brought huge returns during that period.

Amazon’s CEO, Jeff Bezos, is also its founder and chairman. Although he had to temporarily give up the title of “world’s richest man” thanks to his well-publicized divorce in 2019, he quickly regained the title while still maintaining a net worth of over $100 billion due to his nearly 12% stake in the company. Institutionally, the five largest shareholders are the Vanguard Group Inc., BlackRock Fund Advisors, SSgA Fund Management, Fidelity Management & Research and T. Rowe Price Associates. Vanguard owns over 30 million Amazon shares, and the remaining top five own more than 15 million shares each.

Bezos worked at a hedge fund before he left the business to found Amazon in 1994. He used books as a starting point for the company and later expanded Amazon into an online retailer for almost any product.

Learn more about 10 stocks like Amazon that are gifts that keep on giving.

Information is accurate as of Oct. 30, 2019, unless otherwise noted. 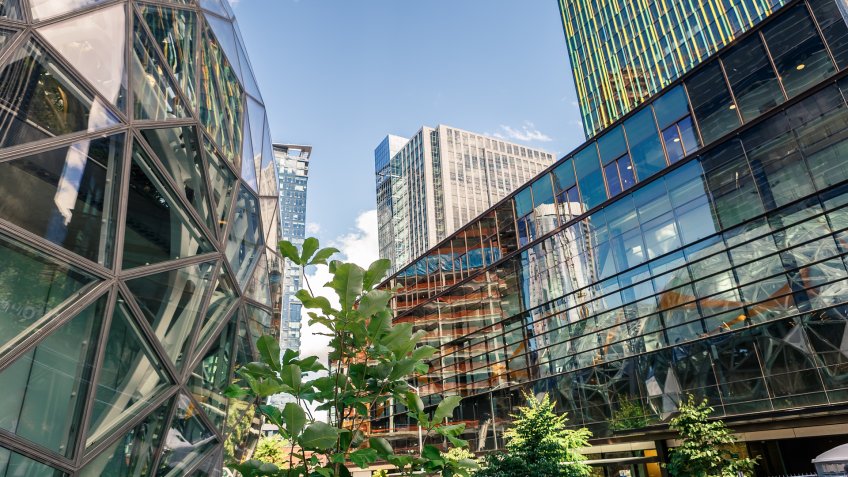 How Major Tech Companies Change the Cities They Moved To

These companies sure know how to leave a mark.

GOBankingRates > Money > Business > How Much Is Amazon Worth?