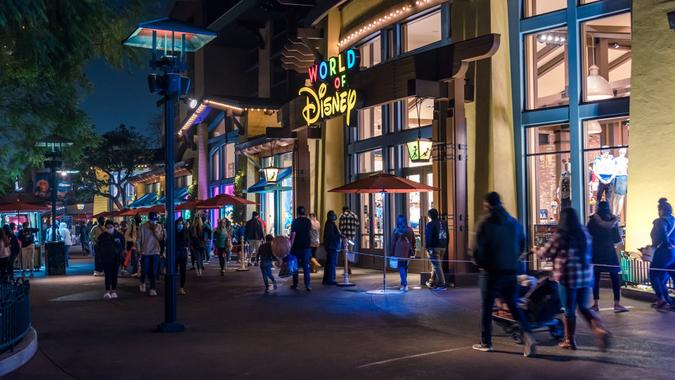 According to the latest annual report, Disney’s key product lines in 2021 included the following:

Mandated closures and reduced operating capacities led to large drops in revenues. Direct-to-Consumer also took a hit, as did Media and Entertainment Distribution, due to production shutdowns. At the same time, the company saw $1 billion in increased costs from government regulation and from safety measures it implemented for its employees and customers, according to its fourth-quarter 2021 earnings statement. As a result, Disney missed earnings and revenue estimates for the fourth quarter of 2021. The company also fell short on the number of new Disney+ subscribers, sending the stock down over 4% in extended trading, CNBC reported.

With Disney theme parks and Disney Cruise Lines fully open and video and movies back in production, Disney is off to a strong start in 2022. In its Feb. 9 earnings release for the first quarter of the new fiscal year, it reported diluted earnings per share of $1.06 compared to 32 cents in the first quarter of 2021, coming in well ahead of analysts’ estimates of 63 cents, according to CNBC. Revenue and new Disney+ subscriptions also exceeded expectations by wide margins. Disney shares surged 8% in extended trading after the earnings release.

In an earnings call with reporters, Disney Chief Financial Officer Christine McCarthy said the company plans to invest heavily in streaming in the second quarter of 2022, CNBC reported. The company announced previously that it plans to make Disney+ available in over 50 countries next year and over 160 countries by the fiscal year 2023. It expects Disney+ to be profitable by 2024 and reach as many as 260 million paid subscribers that same year.

Until then, new marquee-brand content and increased ad revenue from the sports market and Disney’s Hulu streaming service will give this Direct-to-Consumer a much-needed boost.

In a further push into the digital realm, CEO Bob Chapek has appointed Mike White, a Media and Entertainment Distribution executive, to oversee Disney’s metaverse strategy, according to an internal email verified and reported by Reuters on Feb. 15. Chapek first announced in November 2021 that Disney would launch a metaverse initiative that would combine elements of the physical and digital worlds.

While assessing value is sometimes a personal opinion, Disney certainly has a track record of success. The company owns the rights to some of the most well-known characters and brands in the world. There’s a reason why Disney is no. 7 on the Forbes World’s Most Valuable Brands 2020 list.